The United Nations expressed astonishment after a Russian missile attack hit close to Secretary-General Antonio Guterres as he visited Ukraine to help the evacuation of tens of thousands of civilians caught in “mortal danger”.

Guterres and his team were “shocked” by the proximity of the Russian attacks that slammed into central Kyiv as they visited on Thursday but were all safe, a UN spokesman said. It was the boldest attack on the capital since Moscow’s forces retreated weeks ago.

“It is a war zone but it is shocking that it happened close to us,” said Saviano Abreu, spokesperson for the UN’s humanitarian office, without saying how close they were to the point of impact.

“Today, immediately after the end of our talks in Kyiv, Russian missiles flew into the city. Five rockets. And this says a lot … about the Russian leadership’s efforts to humiliate the UN and everything that the organisation represents,” Zelenskyy said, adding it required “a correspondingly powerful reaction”.

‘Crisis within a crisis’

Guterres met with Zelenskyy following talks with President Vladimir Putin on Tuesday when the Russian leader agreed “in principle” to UN and International Committee for the Red Cross (ICRC) involvement in evacuating the Azovstal plant.

Guterres said intense discussions were continuing to enable the evacuation of the steel plant where fighters and civilians are holed up in the southeastern Ukrainian city of Mariupol.

The Mariupol city council has said about 100,000 residents across the city are “in mortal danger” because of Russian shelling and unsanitary conditions, and described a “catastrophic” shortage of drinking water and food.

“Mariupol is a crisis within a crisis. Thousands of civilians need life-saving assistance. Many are elderly, in need of medical care or have limited mobility,” Guterres told reporters. “They need an escape route out of the apocalypse.”

Referring to the possibility of a UN and ICRC-coordinated humanitarian corridor for the hundreds of civilians believed to still be in Azovstal, Guterres said: “As we speak, there are intense discussions to move forward on this proposal to make it a reality.

“I can only tell you we are doing everything we can to make it happen. I’m not going to enter into any comment that could undermine that possibility,” he said.

Russia is preventing wounded Ukrainian fighters from being evacuated from the steel factory, the local governor said.

“They [want to] use the opportunity to capture the defenders of Mariupol, one of the main [elements] of whom are the … Azov regiment,” Donbas Governor Pavlo Kyrylenko told a briefing, referring to a group of fighters that Moscow has vilified.

“Therefore, the Russian side is not agreeing to any evacuation measures regarding wounded troops.”

Kremlin Spokesperson Dmitry Peskov said Putin had been quite clear while civilians could leave the plant, the defenders had to lay down their arms, the Tass state-owned news agency reported. 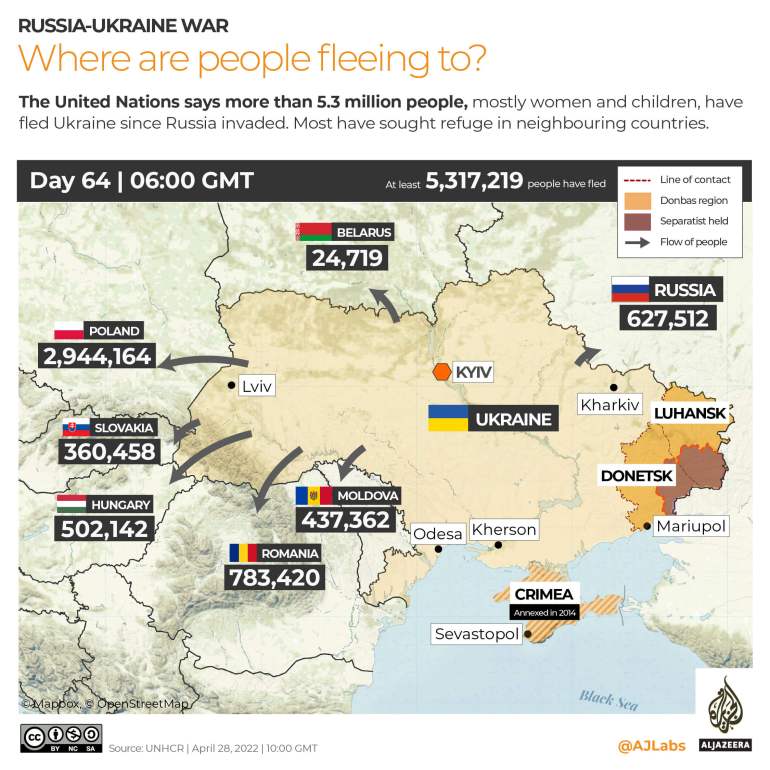 On April 21, nearly two months into the siege of the strategic port city, Russia declared victory in Mariupol although remaining Ukrainian forces were holding out in a vast underground complex below Azovstal, where civilians were also sheltering.

Speaking alongside Guterres, Zelenskyy said: “I trust and believe – just as many relatives of those people who are blocked in Azovstal [steel plant] do – that the secretary-general and we will be able to have a successful result.”

At least one person was killed, and several were wounded in the attack on Kyiv, including some who were trapped in the rubble after two buildings were hit, rescue officials said.

Mayor Vitali Klitschko said the Shevchenkivskyi district in the northwestern part of the city was hit twice, causing fires in at least two high-rise buildings.

The explosions came as Kyiv residents have been increasingly returning to the city. Cafés and other businesses have reopened, and a growing number of people have been out and about, enjoying the spring weather.

“By this heinous act of barbarism Russia demonstrates once again its attitude towards Ukraine, Europe and the world,” Kuleba said on Twitter.

Russia pounded targets from practically one end of Ukraine to the other on Thursday.

Explosions were reported across the country, in Polinne in the west of the country, Chernihiv near the border with Belarus, and in Fastiv, a large railway hub southwest of the capital. The mayor of Odesa in southern Ukraine said rockets were intercepted by air defences.

Ukrainian authorities also reported intense Russian fire in the Donbas – the eastern industrial heartland that the Kremlin is bent on capturing – and near Kharkiv, a northeastern city outside Donbas that is seen as key to the offensive.

In Zaporizhzhia, a crucial way station for tens of thousands of Ukrainians fleeing Mariupol, an 11-year-old boy was among at least three people wounded in a rocket attack authorities said was the first to hit a residential area in the southern city since the war began. Shards of glass cut the boy’s leg to the bone.

Vadym Vodostoyev, the boy’s father, said: “It just takes one second and you’re left with nothing.”

Moscow’s offensive in eastern Ukraine gathered momentum amid suspicions Putin wants to score a major battlefield success in time for Victory Day, one of Russia’s proudest holidays, on May 9. Many observers expect Putin will try to claim a big victory in the east by Victory Day, which marks the defeat of Nazi Germany during World War II.

Guterres condemned atrocities committed in towns such as Bucha, where evidence of mass killings of civilians was found after Russia retreated in the face of unexpectedly stiff resistance.

“Wherever there is a war, the highest price is paid by civilians,” Guterres said, reiterating the importance of investigating alleged war crimes.