All you need to know about protected cultivation, or vertical farming 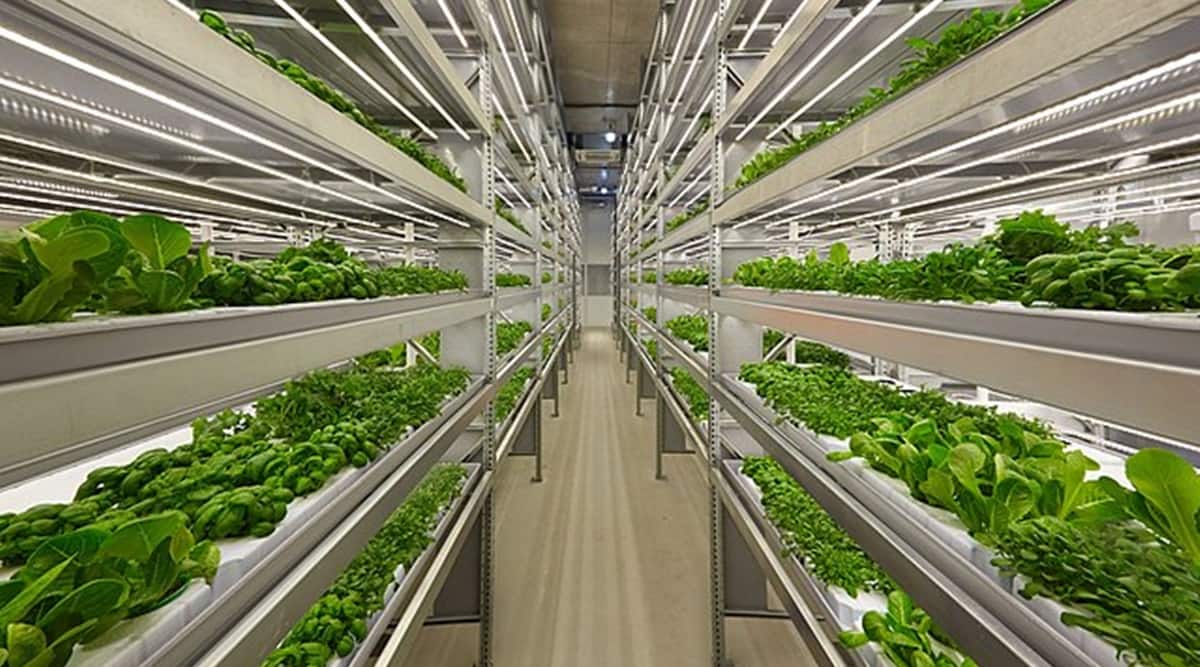 Instead of horizontally on the ground like traditional farming, vertical farming grows crops in vertical, stacked layers without putting too much impact on land and water resources which are scarce. It includes soilless farming techniques, among others.

“Vertical farming systems like aeroponics and hydroponics come under the broad umbrella ambit of ‘protected cultivation’, where one can control and regulate multiple variables like water, soil, temperature, humidity, and so on. Protected cultivation, when practised at scale, offers a massive potential to shorten and optimise our farm-to-plate supply chains by making food available closer to the consumer and thereby can go a long way to improve our nation’s GDP and reduce imports’dependency,” Vasanth Madhav Kamath, founder, and CEO, Hydrogreens Agri Solutions, told indianexpress.com.

Notably, In 1915, Gilbert Ellis Bailey coined the term vertical farming and he went on to write a namesake book.

The modern concept was first proposed in 1999 by professor Dickson Despommier. His concept centered on the idea that urban areas should grow their own food which can save time and resources required for transportation. This also made sure that fresh, local, and seasonal produce was available to the consumer.

It is said that NASA (National Aeronautics and Space Administration) motivated the initiative of aeroponics to find an efficient way to grow plants in space in the 1990s. Since there is no one growing medium, nutrient solutions are sprayed over plants, which requires very less eater, no soil, and minimal space.

The term combines fish farming and hydroponics. The nutrient-rich waste from fish tanks serves as a fertiliser for the hydroponic plants.

Why is it a viable option for a country like India?

While the upfront initial capital cost involved in vertical farming is usually higher, if and when the entire crop production design is done properly, it makes absolute sense and financial viability to grow, harvest, and produce a particular crop throughout the year or in a specific season applying vertical farming methods, emphasised Kamath.

“All crops grown via vertical farming methods are usually over 95 per cent water efficient, as compared to crops grown through traditional agricultural practices. For a country like India, which consists of only around four per cent of the world’s water resources, vertical farming-based technologies can not only increase the efficiency and productivity of our food production but can also lead to quantum leap in water savings, which in turn shall support and give impetus to India’s ambitious goals of achieving carbon-neutrality within its food production ecosystem. Furthermore, the positive impact on the circular economy particularly with vertical farming methods like cocoponics (by upcycling agricultural residues into compost and thus creating value out of it) has the potential to create newer revenue streams and income opportunities, especially for farmers living near wastelands or marginal rural areas and in mitigating the soil degradation problem of India’s rural economy,” he said.

Additionally, as most of the crops are grown “without the use of pesticides”, it leads to “a positive contribution towards better public health as well over time”; hence the consumers can expect zero-pesticide produce, which is also healthy, fresh, and sustainable for the planet.

“Lastly, it is important to emphasise that protected cultivation has the potential to create new jobs, skill sets, and economic opportunities for the agriculture students of our country, who are seen to be able to adept and move forward with the learning curve quickly. If agricultural universities and students are able to capitalise on this, the market is bound to grow significantly and explode with new job opportunities alongside chartering new ground-level innovations and pathways to further develop our agri-economy in the years to come,” he said.