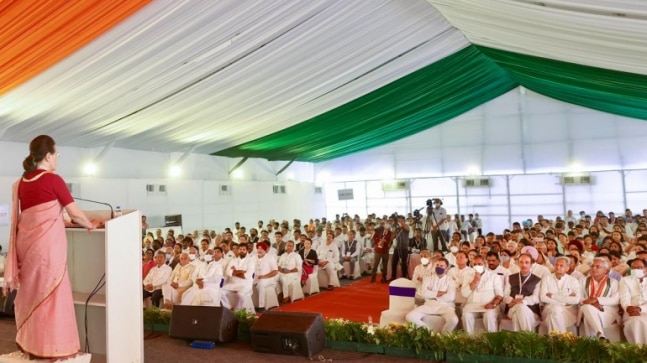 Two terms of Rajya Sabha per Congress leader? This is one of the proposals that the party’s top brass is deliberating upon at the ongoing Nav Sankalp Chintan Shivir in Udaipur, Rajasthan.

Apart from ‘One Family, One Ticket’, Congress’ organisation panel is also contemplating fixing term limits as far as Rajya Sabha members are concerned.

A Congress Working Committee (CWC) member privy to the discussions said, “There is a proposal before panel that two Rajya Sabha terms per Congress leader needs to be fixed. After that they can contest in Lok Sabha or assembly elections, but they shouldn’t be considered for third term in Rajya Sabha.”

Not just Rajya Sabha term, there is a proposal that tenure of all office bearers from the block and district levels to the All India Congress Committee (AICC) should be fixed for five years. This should be followed by a cooling period of three years.

Sources said that after the completion of the tenure, office bearers will have to resign or vacate their post for other leaders. “These leaders can be accommodated within organisation and can be given other work,” said a panel member.

Congress General Secretary Ajay Maken mentioned the same proposal on Friday and added, “Any person who is holding the post continuously has to step down and a cooling period of three years in case that person comes back to the same post.”

STATE UNITS TO GET OWN CONSTITUTION

The panel suggested that during local body elections, frontal organisations, departments, and party cells should be taken into the loop. It also recommended that AICC and state general body meetings should be held after five years.

The other proposals that the panel is discussing at length include Pradesh Committees drafting their own separate constitution, but with prior approval from the CWC.

A CWC member said, “The federal structure has to be respected. Each state in India has different requirements. And in case the state units of Congress party want to have a separate constitution with approval from CWC there is nothing wrong in it. This will give state units space for political manoeuvring and address the issue of diversity.”

Interestingly, this provision of state-specific constitutions is already present in the Congress’s constitution. “It needs to be implemented,” the CWC member added.

Keeping in view the changing scenario, party general secretary Ajay Maken, while addressing media at Udaipur on Friday, said that one of the proposals is that Congress should have its own Public Insight Department and an assessment wing.

The Public Insight Department would be the party’s own internal department that conducts regular surveys to gauge the public mood. “It shouldn’t be just an exercise done during elections. In order to understand the issues and mood of the public, these surveys should be done on regular bases and for that aspect this department should be set up,” he said.

On the other hand, the party’s assessment wing would look inwards it would assess the performance of office bearers, leaders, and workers. Those who are performing their tasks well would be promoted, or otherwise removed from their posts.

Recently, the Congress Disciplinary Committee initiated action against senior party leaders KV Thomas and Sunil Jhakar. The move was an indicator that the party is no longer in the mood to tolerate indiscipline.

Maken said, “Indiscipline issue has also been discussed within our organisation panel and how discipline should be enforced. We are also discussing what action should be taken to ensure discipline within the organisation.”

Another proposal is to train party leaders and workers through various online leadership courses and seminars apart from leadership program.