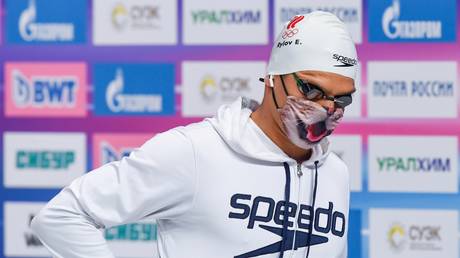 International swimming federation FINA has launched an investigation into Russian star Evgeny Rylov after he competed at the national championships despite being under a nine-month ban from the organization.

Rylov, 25, appeared at the event in Kazan just days after being handed a suspension by FINA last week for attending a Moscow concert which marked the reunification of Russia and Crimea.

“FINA is aware that Mr Rylov competed in the Russian Championships over the weekend and has launched an internal review to ascertain whether FINA sanctions or rules have been broken,” a statement from the organization read.

There was uncertainty over whether the FINA ban would cover the ongoing Russian championships.

The international body suggested to Russian media that the suspension would rule Rylov out, although the head of the Russian Swimming Federation, Vladimir Salnikov, said the event was not being held under FINA auspices.

Rylov ended up winning bronze in the 100m backstroke in Monday’s final in Kazan.

The swimmer himself, who was a double gold medalist at the Tokyo Olympics last summer, said the issue was in the hands of lawyers but was under the impression he could compete freely at national-level competitions.

“I came without knowing if I could compete. Maybe I would have had to go back. It seems that everything was allowed, but today some news was released that they would deal with it,” Rylov told journalists.

“I still didn’t understand… I hope that all the documents have come, that I was allowed to compete, and I hope there won’t be any problems.

“I wouldn’t want other people [to get into trouble]. I’ll survive nine months, anyway the national team will not have major competitions yet.”

Along with its personal sanctions against Rylov, FINA reiterated in its statement last week that Russian and Belarusian swimmers would be barred from all international competitions in 2022.

Rylov was targeted individually by FINA for his appearance at a mass meeting at Moscow’s Luzhniki Stadium in March which was also attended by President Vladimir Putin.

The event celebrated the reunification of Russia and Crimea and was partly held under the banner of ‘A World Without Nazism’.

The swimmer took to the stage alongside other athletes and was dressed in national team gear with a ‘Z’ added to his jacket.

The symbol is used by Russian forces in the military operation in Ukraine and has been used to display support for the armed forces among the population at home.

After his appearance among masses at Luzhniki, Rylov was stripped of his sponsorship deal with swimwear company Speedo.

However, the backstroke star still donned Speedo gear for his events in Kazan.

“They gave me [Speedo] uniforms. I’m above [boycotts]. Although if I set a world record, maybe I would refuse to give my wetsuit to Speedo. Let’s see again,” Rylov said.

Russian sports figures reacted angrily to the sanctions imposed on Rylov, describing them as further evidence of discrimination against Russian stars in the wake of the military conflict with Ukraine.

State Duma Deputy Dmitry Svishchev, who is chairman of the Committee on Physical Culture and Sports, described the step as “Russophobia bordering on Nazism.”

The Russian national championships began on Sunday, April 24, and run until Friday, April 29. They are being hosted at Kazan’s Aquatics Palace.