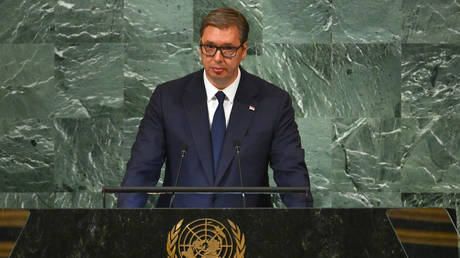 Western countries have failed to explain why they have different points of view on Ukraine and Serbia’s territorial integrity, given that they support Kiev in its fight against Russia, but endorsed Kosovo’s independence, President Aleksandar Vucic said on Tuesday.

In an address to the UN General Assembly in New York, the Serbian leader stated that his country respects the territorial integrity of all countries, including Ukraine, and that many describe the hostilities between Moscow and Kiev as “the first conflict on European soil since WWII.”

He said, however, that the truth about the violation of Serbia’s territorial integrity “is constantly unspoken.”

According to Vucic, Serbia “has never [set] foot” on anybody’s territory, but this “did not prevent the 19 richest NATO countries from attacking a sovereign country without a decision by the UN Security Council.”

He also said that while NATO pledged to respect the full territorial integrity of Serbia, it did not stop many Western countries from unilaterally recognizing the breakaway province of Kosovo in 2008.

Earlier on Tuesday, the Serbian president warned that the world is moving closer to a global war, adding that “the UN has been weakened,” given that the great powers “practically destroyed the UN order over the past several decades.”

NATO occupied Kosovo in 1999, after a 78-day bombing campaign against what was then Yugoslavia. The province declared independence in 2008 with Western support. While the US and most of its allies have recognized it, many other countries, including Russia and China, have not.