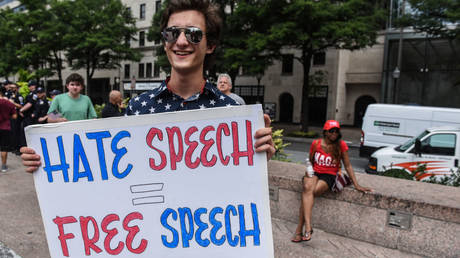 President Joe Biden’s administration is expanding the US Department of Homeland Security’s (DHS) purview to include fighting speech that the government deems to be “disinformation.”

Plans for the new initiative were revealed on Wednesday, when DHS chief Alejandro Mayorkas said in a congressional hearing that his department had created a “disinformation governance board.” The new body will be headed by Nina Jankowicz, whose resume includes advising the Ukrainian Foreign Ministry and overseeing the Russia and Belarus programs at the National Democratic Institute.

“Cat’s out of the bag,” Jankowicz said in a Twitter post. “Here’s what I’ve been up to the past two months, and why I’ve been a bit quiet on here.”

Although Mayorkas unveiled the new entity in response to a question about disinformation being used to sway elections, the new board will reportedly focus on countering “misinformation related to homeland security, focused specifically on irregular migration and Russia.”

The administration announced its disinformation push just two days after billionaire Elon Musk reached an agreement to buy Twitter for $44 billion. Musk has vowed to restore freedom of speech on the platform, which has banned prominent conservative voices and was accused of influencing the 2020 presidential election by suppressing news on an alleged Biden influence-peddling scandal.

White House press secretary Jen Psaki, who was questioned about the Twitter deal by reporters on Monday, said Biden “has long been concerned about the power of large social media platforms” and will urge Congress to take steps to help combat online misinformation.

Ironically, Jankowicz promoted false information about the alleged Biden scandal weeks before the 2020 election, saying the New York Post’s suppressed story had been branded a “Russian influence op” by former intelligence officials. She also called the report a “Trump campaign product” and warned that supporters of President Donald Trump would show up at the polls with weapons to intimidate voters. The emails on which the Biden story was based were later verified by other major media outlets, including the New York Times and the Washington Post.

Responding to news of Musk’s Twitter takeover on Monday, Jankowicz said, “I shudder to think about if free speech absolutists were taking over more platforms, what that would look like for the marginalized communities, which are already shouldering disproportionate amounts of this abuse.”

NEWS: DHS is officially launching its own Ministry of Truth, or the so-called "Disinformation Governance Board."

Nina Jankowicz will head the board as executive director. "Free speech absolutists" make her "shudder," so everything should be fine. pic.twitter.com/wVc7hEBX11

Last December, Jankowicz called Musk an “online abuser” and said the best antidote to such behavior is “to deny them influence and notoriety.” She also has defended regulation of speech, saying, “The ‘free speech vs censorship’ framing is a false dichotomy.”