Biden pledges $150m to ASEAN with eye on China 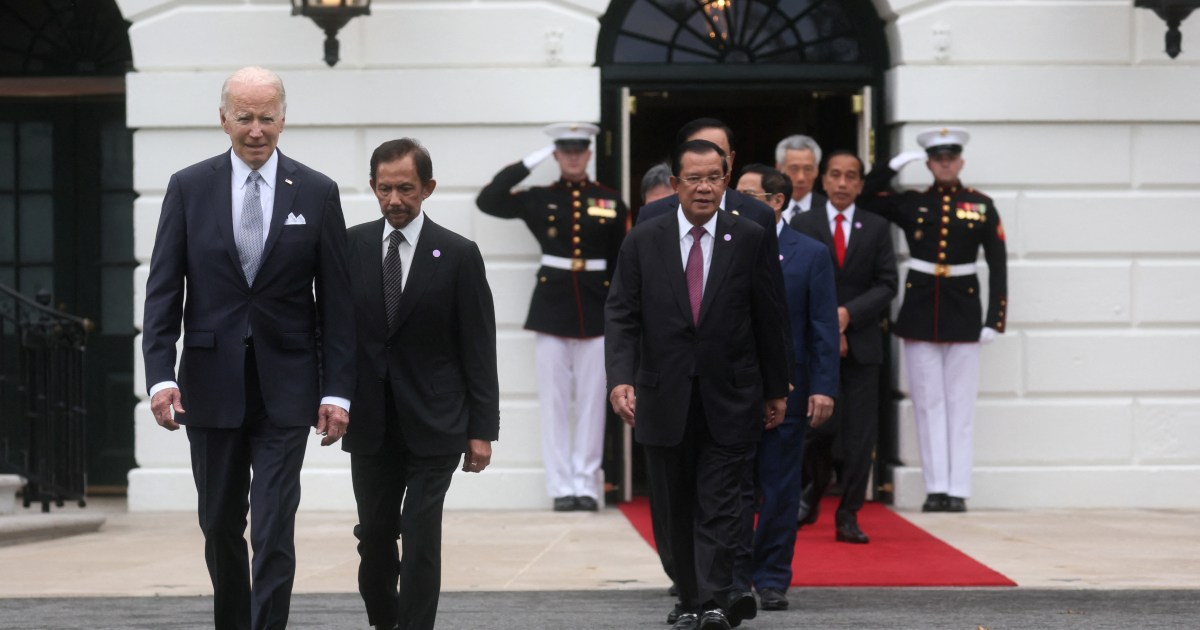 US president kicks off summit with Southeast Asian leaders with commitment to fund infrastructure, security and health.

US President Joe Biden opened a summit of Southeast Asian leaders with a pledge to spend $150m on infrastructure, security and the anti-pandemic efforts, as Washington seeks to counter China’s rising influence in the region.

Biden on Thursday kicked off a two-day summit with the 10-nation Association of Southeast Asian Nations (ASEAN) in Washington with a dinner at the White House ahead of talks at the State Department on Friday.

While Russia’s invasion of Ukraine is on the agenda, Biden’s administration hopes to demonstrate that Washington remains focused on the Asia-Pacific as Beijing becomes an increasingly powerful player in the region.

“We are not asking countries to make a choice between the United States and China,” a senior US administration official told reporters.

“We want to make clear, though, that the United States seeks stronger relationships.”

Washington’s financial commitment includes a $40m investment to reduce the carbon footprint of the region’s power supply, $60m in maritime security, and $15m in health funding to tackle COVID-19 and future pandemics, an official said. Other funding will be aimed at helping countries develop the digital economy and legal frameworks for artificial intelligence.

The US Coast Guard will also deploy a ship to the region to help local fleets counter what Washington and countries in the region have described as China’s illegal fishing.

Biden is working on more initiatives, including “Build Back Better World” infrastructure investment and an Indo-Pacific Economic Framework (IPEF), although neither has been finalised.

The summit marks the first time that ASEAN’s leaders have gathered as a group at the White House and their first meeting hosted by a US president since 2016.

Eight ASEAN leaders are expected to take part in the talks. Myanmar’s leader was excluded over a coup last year and the Philippines is in transition after an election, though Biden spoke to the country’s president-elect, Ferdinand Marcos Jr, on Wednesday. The country was represented by its foreign affairs secretary at the White House.

Southeast Asian countries share many of Washington’s concerns about China.

China’s claim to more than 90 percent of the South China Sea, one of the world’s most important shipping passageways, has stoked tensions with many of its regional neighbours, especially Vietnam and the Philippines.

Countries in the region, however, have also been frustrated by Washington’s level of economic engagement since former President Donald Trump quit the Trans-Pacific Partnership trade pact in 2017.

Malaysian Prime Minister Ismail Sabri Yaakob on Thursday said the US should adopt “a more active trade and investment agenda with ASEAN, which will benefit the U.S. economically and strategically”.

The IPEF will be launched on Biden’s trip to Japan and South Korea next week, although the initiative does not currently offer the expanded market access Asian countries seek, due to the US president’s concerns about American jobs.

Analysts say that even though ASEAN countries share US concerns about China, they remain cautious about siding more firmly with Washington, given their predominant economic ties with Beijing and limited US economic incentives.