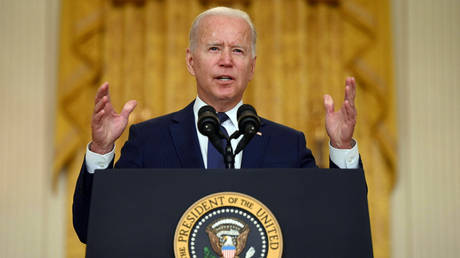 US President Joe Biden will officially ask Congress later on Thursday to grant him the authority to seize the assets of wealthy individuals believed to have links to the Kremlin and use them to help Ukraine, the White House has revealed in a statement.

Biden is expected to propose a “comprehensive legislative package that will enhance the United States Government’s authority to hold the Russian government and Russian oligarchs accountable for President Putin’s war against Ukraine.” The measures would result in the “forfeiture of property linked to Russian kleptocracy,” allowing the US government to “use the proceeds to support Ukraine.”

Under the proposal, authorities would be able to impound property in the US “owned by sanctioned Russian oligarchs and that has a connection to specified unlawful conduct.” Moreover, Biden wants to make it a crime “for any person to knowingly or intentionally possess proceeds directly obtained from corrupt dealings with the Russian government.” The statement released by the White House, however, does not specify what criteria would be used to determine which dealings could be classified as “corrupt.”

To be “forfeited” under Biden’s proposal is also property “that Russian oligarchs use to facilitate the evasion of sanctions” – something that US law currently does not allow for. In addition, the US president is expected to ask lawmakers to add sanctions evasion to the definition of “racketeering activity.”

Prominent in Biden’s speech will also be US cooperation with “international partners to recover assets linked to foreign corruption.” The White House statement noted that back in March the US Departments of the Treasury and Justice launched a Russian Elites, Proxies, and Oligarchs Task Force to “coordinate the freezing and seizing of Russian assets around the world.”

To date, members of the European Union have frozen more than $30 billion in Russian assets, “including almost $7 billion in boats, helicopters, real estate, and artwork,” the statement notes. According to the White House, the US Treasury has “sanctioned and blocked vessels and aircraft worth over $1 billion” owned by individuals believed to have close ties to the Kremlin. Moreover, “hundreds of millions of dollars of assets belonging to Russian elites” have been frozen in US bank accounts.

Since the start of Russia’s military campaign against Ukraine on February 24, the US, Canada, the UK, the whole of the EU, Japan, Australia and several other countries have slapped Moscow with several rounds of sweeping economic sanctions. The punitive measures target, among other things, the assets of Russia’s Central Bank, several of the country’s major commercial banks, entire industries, and a number of individuals including top officials. Russia has accused the West of essentially “stealing” its assets, and responded with counter-sanctions.