Bill and Melinda Gates top up foundation with largest-ever donation 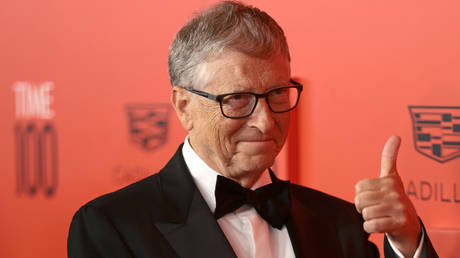 Microsoft billionaire Bill Gates and his ex-wife Melinda French Gates have donated a whopping $20 billion to their Bill and Melinda Gates Foundation, their largest-ever gift, they announced on Wednesday. The massive donation brings the foundation’s total endowment to $70 billion.

“The great crises of our time require all of us to do more,” Bill Gates declared, sharing his hope that the mammoth pile of money might “mitigate some of the suffering people are facing right now and help fulfill the foundation’s vision to give every person the chance to live a healthy and productive life.”

While Gates has been a ubiquitous media presence since the start of the Covid-19 pandemic, very publicly pouring enormous sums of money into vaccine development, he expressed concern that the next few years could reverse all of the foundation’s recent accomplishments. The billionaire lamented that the pandemic, soaring inflation across world economies, the conflict in Ukraine, and climate change had congealed into a particularly troublesome set of circumstances that must be met with muscular humanitarian aid.

“The world economy is entering a low-growth cycle, with rising interest rates and high inflation,” Gates wrote in a press release trumpeting the couple’s donation. Calling for “all sectors of society – government, the private sector, and the nonprofit sector including philanthropy – to engage on these issues,” he observed that cash-strapped governments still recovering from the self-imposed economic wounds of Covid-19 might not be able to afford sorely-needed humanitarian projects. The Gates Foundation, he explained, would help fill the gap.

Calling the Covid-19 pandemic “one of the biggest setbacks in history” and the Ukrainian conflict “a gigantic tragedy for the entire world,” Gates warned that both events could plunge all of humanity into an economic abyss for a prolonged period. The newly enriched Gates Foundation, he implied, would come to the world’s rescue, addressing the thorny issues of climate change, food security, childhood mortality, gender equality, and pandemic prevention, with annual charitable outlays expected to exceed $9 billion by 2026.

The Gates’ style of giving has come under fire from detractors, who point to the fact that Bill Gates has made more money as a philanthropist than he ever did as a software tycoon. A 2020 investigation also found the Gates Foundation had made nearly $250 million in tax-deductible “charitable” grants to companies in which it held stock. However, this apparent conflict of interest has gone largely unremarked upon by the Western media establishment, where many of the largest news outlets also receive generous funding from the foundation.