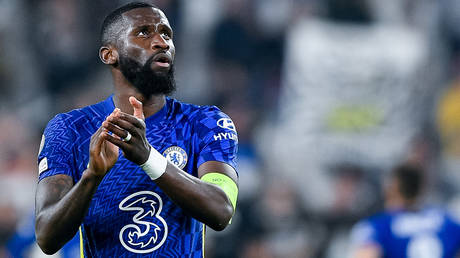 Chelsea and Germany defender Antonio Rudiger has reportedly agreed a four-year contract with Real Madrid after his desire to exit was confirmed by coach Thomas Tuchel at the weekend.

The Daily Mail reports on Monday that Rudiger has turned down bigger offers from other European giants such as Paris Saint-Germain, Juventus, and Barcelona after telling Chelsea of his desire to leave at the end of the season.

Yet what he has allegedly accepted from the La Liga giants is believed to be worth more than the £230,000-per-week ($292,000) proposal Chelsea offered Rudiger to stay in west London.

Should Madrid land the 29-year-old, a near decade-long quest to see him in Los Blancos colors since monitoring Rudiger in his Stuttgart days would come to a successful conclusion.

Simultaneously, the club has also been put up for sale with Abramovich unable to profit in any way from a purchase overseen by British authorities acting in response to Russia’s military operation in Ukraine.

On Sunday, following a 1-0 victory over West Ham, Tuchel confirmed that Rudiger will end his half-decade tenure at Chelsea as a free agent in the coming weeks after the FA Cup final against Liverpool May 14, and therefore won’t wait around to see who the new owners are.

"Now we enter in a situation where we could not fight anymore because of the sanctions."

Thomas Tuchel said Chelsea did everything to try to keep Antonio Rüdiger.

“The situation is that he wants to leave the club. He informed me of this in a private talk,” Tuchel explained to Sky Sports.

“We gave everything – me and the club – but we could not fight anymore because of the actions,” Tuchel continued. “Without the sanctions we would at least be able to carry on fighting, but our hands are tied. We don’t take it personally. It is his decision.

“He is a key figure and will stay that way until the end of the season. But it is disappointing. We will miss him a lot. He gives courage in the dressing room.

“The kind everyone is afraid of, but the kind to play 50-55 games at an outstanding level. He is a top defender in the last one-and-a-half years for me. We then need to find another solution,” Tuchel lamented, though he had no ideas as to what that could be given Chelsea’s current predicament, with captain Cesar Azpilicueta and Andreas Christensen also set to walk on frees across the backline.

“In the moment [we won’t be able to replace him], because of the sanctions. Hopefully the sanctions will be the past,” Tuchel said.

“We had a connection from day one and he deserves my full support,” Tuchel began again on Rudiger. “I’m just happy to have had the chance to coach him in the team and the club did as well. We had offers, big offers and the club tried everything but we cannot fight anymore.

“We have the sanctions, we can’t continue. It is what it is,” Tuchel stressed. “It would be ideal [for sanctions to be lifted before the transfer window] but even if we wish for it, you can’t pull grass for it to grow faster.

“We have to deal with what the reality is. The sanctions are still in place and the situation is not cleared for next season. We try to focus on the last weeks,” Tuchel concluded.

Just as regretful as Tuchel regarding Rudiger’s future departure was club legend John Terry, who questioned: “How have we let this man go?” on Instagram.

Rudiger will leave the UK capital lifting every major trophy in England except the EFL Cup, in addition to winning everything on offer in Europe plus the Club World Cup earlier this year.

Possibly following him out of the exit door is a figure who has achieved far less in Romelu Lukaku, though.

Joining for a club record £97.5 million ($124 million) fee from Inter Milan last summer, the Belgian is currently in the throes of a second flop spell at Chelsea but Calciomercato report that new contacts have been made by the striker with the Nerazzurri board as per a potential return to Serie A.

To make this happen, it seems Chelsea would have to loan the 28-year-old back to the Italians with Lukaku also taking a considerable pay cut.

Transfer speculation aside, Chelsea now need to focus on their next Premier League clash away at Manchester United on Thursday, where three points are vital to locking down third place and automatic Champions League qualification next season.