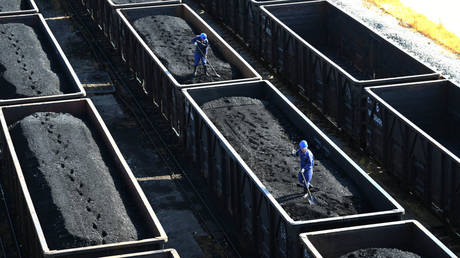 Chinese purchases of Russian coal reached 8.54 million tons, up from 7.42 million tons in July, marking a significant year-on-year growth of 57%, according to data released by the General Administration of Customs on Tuesday.

The monthly figure is reportedly the highest since comparable statistics were launched back in 2017.

The surge is attributed to the drought and heatwave that hit western and southern China in late July. Extremely hot weather forced coal-fired power plants to step up production to satisfy soaring demand for air conditioning and close the supply gap from hydropower stations.

Russia has dramatically boosted sales of energy commodities, including thermal coal, to Asian buyers after the European Union suspended coal purchases from the country.

Prices for discounted Russian coal have reportedly increased as China and India boosted purchases, but they were still lower than for domestic coal of the same quality. Russian thermal coal at 5,500 kcal on delivery basis to China was reportedly fetching nearly $155 per ton late last month, up from about $150 per ton in July.