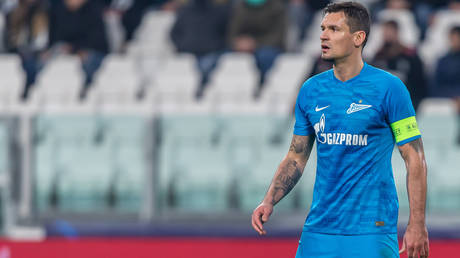 Croatian football officials have come to the defense of Dejan Lovren after the Zenit St. Petersburg star was attacked by a newspaper in his homeland.

Media outlet ‘Jutarnji list’ ran a controversial opinion piece on April 23 calling Lovren “an a**hole from Russia” as he remains at Zenit amid the conflict with Ukraine.

The Croatian Football Federation (HNS) has now demanded an apology from Jutarnji list editor-in-chief Goran Ogurlic, sharing the contents of a letter which had been sent to the media figure.

“We fully support journalistic freedom and the right to free speech of each individual,” the letter began.

“In doing so, we can also understand the need for a colorful expression with which an individual author wants to show his wit, creativity and stylistic skill.

“However, we believe that it is absolutely inappropriate, unprofessional and unethical about any individual, including Croatian football player Dejan Lovren, to write in the way that is the case in the text, in which the author insults an undoubtedly successful athlete and proven humanitarian at every human and professional level,” the letter added.

“As an organization, we consider ourselves obliged to react when the reputation of the Croatian national team is insulted in such a malicious, inappropriate, unprofessional and vulgar way.

“Insulting the intelligence of a footballer and linking it to the fact that a person is playing a sport in which the ball is hit with his head is not only offensive, but also completely misguided and does immeasurable damage to the sport itself.”

The Croatian Football Federation described Lovren as having an “indomitable character” and noted his various charity work.

“Mr. Ogurlic, we invite you to issue a public apology to Dejan Lovren for the offensive text, and we hope that in the future any criticism will be approached with appropriate respect for the person criticized while respecting professional standards,” the message added.

“Dejan Lovren absolutely deserved this respect, whether someone agrees or disagrees with his opinions, actions or views.”

Lovren was also criticized earlier this month after indicating he would cancel his Disney+ subscription after the company highlighted its support for LGBTQ+ rights.

Lovren himself reacted angrily to the Jutarnji list article, sharing a screenshot of it on his Instagram page earlier this week.

“I don’t comment on what journalists write about me, but this time I have to,” wrote the 32-year-old.

“I will always be for freedom of speech, especially when it comes to our freedoms, which we unfortunately do not have lately.

“It has happened that if you express your opinion publicly, and it does not coincide with the opinions of media outlets, houses or journalists, you will be subjected to public lynching.

Lovren described the article as a “desperate provocative text.”

“I will not allow this kind of harassment with my character and I will take all permissible legal actions to put an end to it! Insulting and humiliating is NOT FREEDOM OF SPEECH!” said the furious star.

Reports in the Russian media back in March had claimed that Lovren was seeking to terminate his contract with Zenit, although those claims were swiftly denied by senior figures at the club.

Unlike many of their Russian rivals, Zenit have thus far managed to keep hold of their top foreign stars despite the conflict in Ukraine.

The Gazprom-backed club did, however, agree to terminate their contract with Ukrainian defender Yaroslav Rakitskiy as he returned to his homeland.

Record Ukraine international appearance maker Anatoliy Tymoshchuk has refused to leave his position as assistant coach at Zenit despite being stripped of all his accolades by the Ukrainian football authorities.

Denouncing Tymoshchuk for not speaking out about the Russian military campaign, the Ukrainian Association of Football (UAF) accused the former defensive midfielder of “working for the club of the aggressor.”

Lovren joined Zenit from Liverpool in 2020, having won the UEFA Champions League with the English giants one year previously.

The Croatian defender was also known for striking up a ‘bromance’ with Egyptian king Mo Salah while at Anfield.

Since making the switch to Zenit, Lovren has helped them to the Russian Premier League title in 2021 – their third in a row – as well as a pair of Russian Super Cup successes.

Zenit are on course to defend their Russian league crown this season, holding a healthy six-point lead at the top of the table with four games remaining.

However, Lovren, who has captained the team, has been restricted by injury to just 14 league appearances this season and has missed the Russian club’s last eight Premier League games.

Lovren has won 70 international caps and was part of the Croatian team which went all the way to the World Cup final in Russia in 2018.

He is reportedly on a deal at Zenit which runs until the summer of next year.