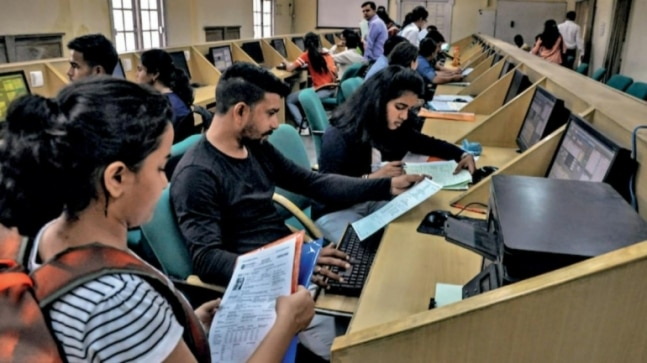 The Central University Entrance Test, which is mandatory for undergraduate admission to central universities in the country, is causing issues for the aspirants and their parents alike. A large section of students are facing errors on the CUET 2022 admit cards and are nervous about the new exam pattern.

Roshni is one among the aspirants who are facing similar difficulties. Her access to computers was limited and now she faces the daunting challenge of appearing in a six-and-a-half-hour examination session online.

A total of 86 universities, including Delhi university, will take admissions based on the CUET this year, but lakhs of students are not sure about the exact pattern and the question format.

Almost 15 lakh aspirants are set to appear for the examination on Friday. India Today spoke to some of the students who are still trying to chalk out a strategy to approach this computer-based test. Samarth, a student from a government school in Jharkhand, told India Today that he is not sure about the computer-based examination and how he will perform through different sessions.

“In a classroom situation, we are used to answering on the sheets. Even though we worked with the OMR sheets, we have never given such an online exam,” he said.

One of the most common complaints is about the scheduling of the examination. Students are complaining that the whole concept behind the CUET was to provide a level playing field for all boards.

Akshita, a student from a private school in Delhi, said she now has to appear for a set of subjects on Saturday. Meanwhile, her cousin’s sister will appear for the same set of subjects in August. She claimed this was a disadvantage as she hardly had any time to prepare for the subjects.

MULTIPLE SUBJECTS ON A SINGLE DAY

Akshat told India Today that although he can handle the long hours of examination, he has to prepare for multiple subjects for which the test will be conducted on the same day.

Although the National Testing Agency (NTA) has come out with a few mock tests, the students are unsure about the level of difficulty and pattern of the question papers. In domain-specific subjects, the duration of the examination will be 45 minutes. A student will have to answer 40 out of 50 questions. A student can appear in a maximum of six domain-specific subjects, while a person can opt for two languages and a general test that consists of 75 questions out of which a student has to answer 60 in one hour.

Several students, school teachers and parents have raised apprehension about the upcoming #CUET flagging short notice, confusion in admit cards and the exam being split in two phases. More in this report. #NewsToday | @sardesairajdeep @KumarKunalmedia pic.twitter.com/o7RZCRodrk

During the pandemic, there was a 30% reduction in the syllabus of different subjects. Now the students are not sure that will be the case.

Many students have claimed that for two sessions they have been alloted two different exam centres. Hardik Vyas, a student, got Jaipur and Bikaner as centres for two sessions happening on the same day.

Although the UGC chairman on Tuesday claimed that 98% of the students have been given the centre of their choices, students claim this is not the case. Meanwhile, on many admit cards the name of the center is missing.

The Common University Entrance Test (CUET), or CUET-UG, will be conducted from July 15 to August 10, the National Testing Agency (NTA) announced last week.