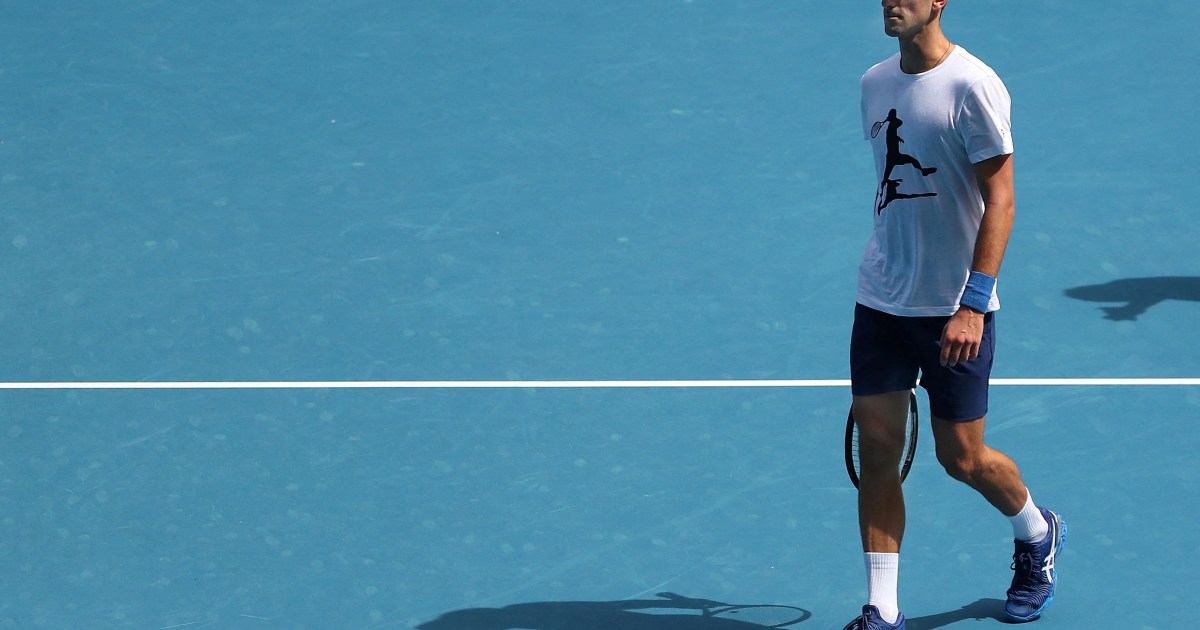 Serbian tennis player flew into Melbourne a week ago claiming a vaccine exemption because of a positive PCR test result.

Novak Djokovic knew he had tested positive for COVID-19 when he attended a newspaper interview and photoshoot at his tennis centre in Serbia last month, admitting he made an “error of judgement” and should have immediately gone into isolation.

Djokovic moved to clarify “ongoing misinformation” about his movements while he was infectious last month and about errors on the travel document he used to enter Australia, where his visa was revoked and then reinstated in a COVID-19 vaccination saga that has overshadowed the days leading up to the Australian Open.

A statement was posted on Djokovic’s social media accounts while the men’s top-ranked tennis player was holding a practice session on Wednesday.

The nine-time and defending Australian Open champion is in limbo before the year’s first tennis major starts next Monday, a week after he won a legal battle allowing him to stay in the country.

But he still faces the prospect of deportation because he is not vaccinated against COVID-19, a decision entirely at the discretion of Australia’s immigration minister if deemed to be in the public interest.

Reports emerged that Djokovic attended events in his native Serbia last month after testing positive on December 16, including presenting awards to children on December 17.

There has also been speculation that errors on his immigration form could potentially result in the cancellation of his visa.

On the form, Djokovic said he had not travelled in the 14 days before his flight to Australia. The Monte Carlo-based athlete was seen in Spain and Serbia in that two-week period.

Djokovic described the speculation as “hurtful” and said he wanted to address it in the interest of “alleviating broader concern in the community about my presence in Australia”.

Djokovic said he took rapid tests that were negative and he was asymptomatic in the days before he received his positive result from an approved PRC test he undertook out of an “abundance of caution” after attending a basketball game on December 14 “where it was reported that a number of people tested positive”.

On the day after his claimed positive test in Serbia, Djokovic appeared at a youth tennis event and at a ceremony to honour him with stamps bearing his image, both apparently without a mask.

Djokovic, who made no mention of the stamp ceremony, said he only received the PCR test result after attending the children’s tennis event.

But he admitted that he also went ahead with an interview and photoshoot with French sports newspaper L’Equipe on December 18.

“I felt obligated to go ahead … but did ensure I socially distanced and wore a mask except when my photograph was being taken,” Djokovic said in the statement.

“While I went home after the interview to isolate for the required period, on reflection, this was an error of judgement and I accept that I should have rescheduled the commitment.”

He addressed the travel declaration by saying it was submitted on his behalf by his support team and that “my agent sincerely apologizes for the administrative mistake in ticking the incorrect box”.

“This was a human error and certainly not deliberate,” he wrote. “The team has provided additional information to the Australian Government to clarify this matter.”

There is growing concern in the community, meanwhile, with COVID-19 cases surging.

Victoria state, whose capital Melbourne is hosting the Australian Open, reported 21 deaths on Wednesday along with 40,127 new cases.

Deputy Premier James Merlino said the state’s healthcare system is strained, with about 6,600 workers off duty after testing positive or coming into close contact with a positive case, and new pandemic orders are coming into force to make booster shots mandatory for critical workers.

If Djokovic’s visa is cancelled, his lawyers could go back to court to apply for an injunction that would prevent him from being forced to leave the country.