Does the Kazakh crisis provide Russia a chance to restore power? 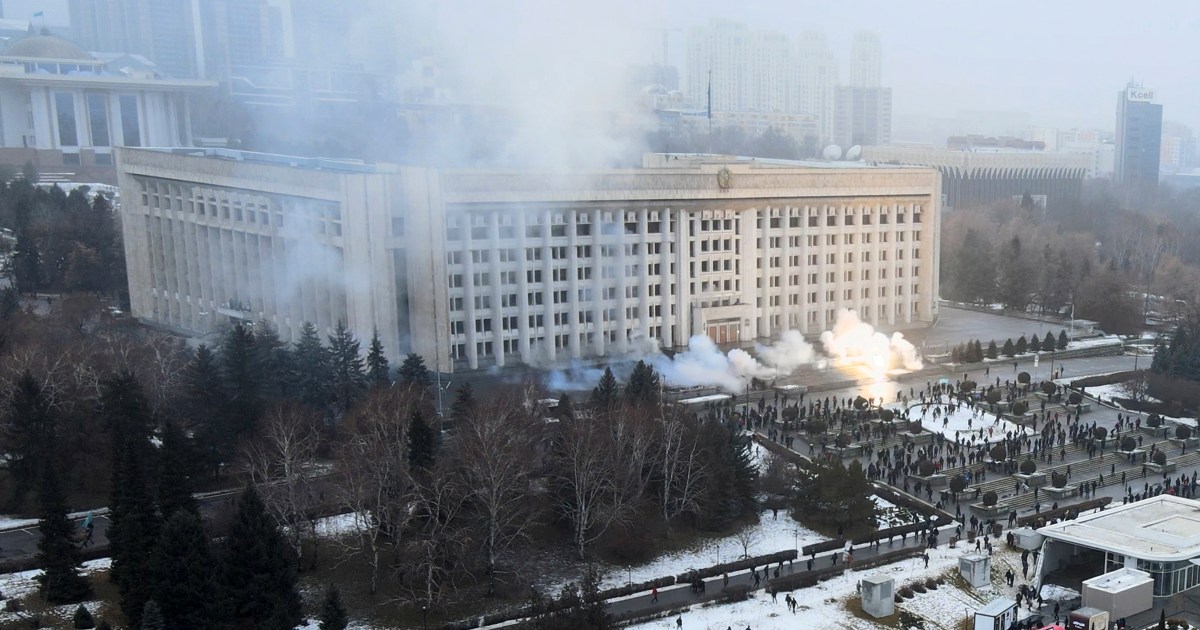 Young, leaderless and disorganised, protesters rallied and stormed government buildings throughout Kazakhstan, toppled the statue of its first president, Nursultan Nazarbayev, burned his former residence and clashed with police.

What united them was their chant: “Shal, ket!” (Old man, leave!)

In 2019, he stepped down after handpicking an uncharismatic successor, Kassym-Jomart Tokayev, but retained power as head of the Security Council.

Tokayev had initially tried to appease the protesters.

On Wednesday, he dissolved the government, dismissed Nazarbayev from the Security Council and lowered fuel prices that sparked the unrest in a western town on January 2.

But as disoriented law enforcement officers seemed unable to stop the rallies, the violence and the looting, Tokayev urged a Russia-dominated security bloc to help “quell the terrorist threat”.

Civilians and police have died in the clashes, with officers reportedly beheaded. There are no details on protester casualties in the tightly controlled country, where an internet blackout on Wednesday made it even harder to access reliable information.

To some observers, Tokayev’s move signals Moscow’s chance to restore its power in Kazakhstan, whose immense hydrocarbon resources made it Central Asia’s economic powerhouse.

“For some, it’s a popular revolt, and for some – an excellent chance to restore the USSR at the expense of frightened dictators who betray their country to save their skin and what’s left of their power,” Nikolay Mitrokhin, an expert on the region and researcher at Germany’s Bremen University, told Al Jazeera.

Moscow has, to a degree, distanced itself from the mayhem.

The Kremlin has said Kazakhstan can “independently solve its domestic problems” and warned against foreign interference.

At the same time, a Russian-led military alliance of former Soviet states is headed to Kazakhstan in a bid to restore order.

The bloc is known as the Collective Security Treaty Organization (CSTO) and includes Russia and five ex-Soviet nations. The announcement about its readiness to jump in was made on Wednesday night by Armenian President Nikol Pashinyan.

‘This unrest is on an entirely different scale’

While Kazakh officials cast the protesters as “extremists”, the crowds of mostly young Kazakhs are uncoordinated, have no apparent leaders and are not backed by Kazakhstan’s marginalised and fractured opposition.

“There are no common [organisational] structures and obvious leaders, so far this is protest of workers from main resource industries, apparently, small businessmen and youngsters,” Mitrokhin said.

The protests are also totally different from any unrest in post-Soviet Kazakhstan that had been easily localised and cracked down upon, another observer said.

“This unrest is on an entirely different scale – encompassing the whole country – and shows the extent to which previous stability was superficial, and founded on a division of the spoils by a small, unaccountable elite,” Kevork Oskanian, a lecturer at the University of Exeter in the United Kingdom, told Al Jazeera.

Four of the five ex-Soviet nations in Central Asia, a mostly Muslim, resource-rich region of more than 65 million stretched strategically between Russia, China and Afghanistan, have been ruled by aged leaders who cut their teeth in politics as communists.

Even in neighbouring Kyrgyzstan, the region’s youngest president, 53-year-old Sadyr Japarov was a member of the Young Communist movement and said he dreamed of “becoming someone like” one of the longest-serving Soviet leaders, Leonid Brezhnev.

For three decades after the Soviet collapse, Central Asia’s secular leaders used the alleged threat of “religious radicalism” as a pretext to stifle dissent and opposition, and extend their rule through controversial elections, term extensions and popular “referendums” criticised by the West.

The Kazakh protests are not just a warning to the Nazarbayev clan that created a “patronal, hydrocarbons-based dictatorship”, analyst Oskanian said.

“Other dictators across the region with similar patronal systems will be watching warily, not least [Russian President] Vladimir Putin,” he said.

Even though Moscow’s own hardline tendencies culminated in last year’s “nullification” of Putin’s presidential terms that allows him to stay in power until 2036, the Kremlin did not specifically cultivate the Central Asian strongmen.

It widened ties with Kyrgyzstan and convinced it to expel a United States military base after three popular revolts toppled three presidents in 2005, 2010 and 2020.

Its ties with Uzbek President Islam Karimov were lukewarm until his 2016 death and improved under his reformist successor Shavkat Mirziyoyev.

“Russia hardly cements anything in the region in purpose, anything but its physical and institutional presence,” Pavel Luzin, a Russia-based analyst with the Jamestown Foundation, a think-tank in Washington, DC, told Al Jazeera.

This presence has manifested in military bases in Tajikistan and Kyrgyzstan, a Soviet-era cosmodrome in Kazakhstan, a navy flotilla in the oil-rich Caspian Sea and Moscow’s role in the peace process in Afghanistan that borders three of the five ex-Soviet “stans,” Luzin said.

As for average Kazakhs, the protests were something they saw coming – and feared.

“It’s a mix of hopes and fears,” said a resident of Almaty, who requested Al Jazeera withhold his name because of the uncertain situation.

He worries about the possible involvement of right-wing nationalists who are seen as a threat by Kazakhstan’s secular residents and multiple ethnic minorities.

National patriots “will be the worst”, he said citing fear for his wife, who is ethnic Korean.

Moscow and Beijing, another increasingly dominant power in the region, prefer to prop up these leaders, but political or financial backing mean little to the post-Soviet generation that sees few career opportunities in politics and needs a chance to voice their dissatisfaction.

An international observer said that President Tokayev may “quell the protests” for now with a combination of a police crackdown and concessions.

“But the protests have made evident deep-seated anger in the population about much larger issues than gas prices,” Ivar Dale, a senior policy adviser with the Norwegian Helsinki Committee, a rights watchdog, told Al Jazeera.

Dale lived in Kazakhstan for several years and visited the town of Zhanaozen, where the protests started on January 2 – and had taken place in 2011, leading to the killing of 16 protesting oil workers by police and a string of punitive measures throughout the nation.

“It’s no coincidence that this started in Zhanaozen, where authorities forced a lid on discontent 10 years ago. The corruption surrounding the elite in Kazakhstan is evident to everyone, and can’t be hidden by constantly blocking news sites or shutting down independent newspapers. Something more fundamental needs to change,” he said.