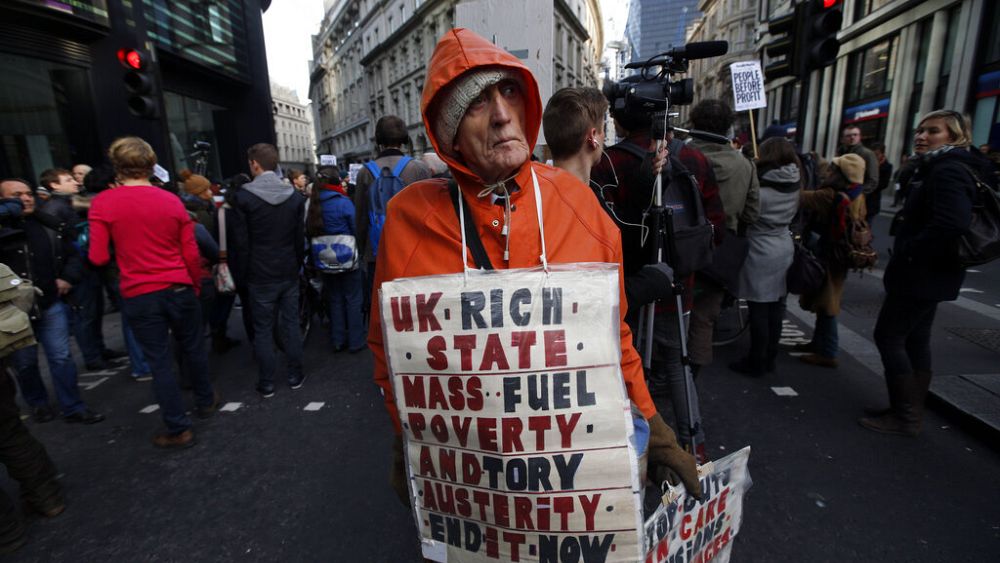 Kary fears for the future of her daughter and two young grandchildren.

Her finances are already close to breaking point covering just food and bills, with the mother-of-two struggling to find the money to pay for clothes for her children or essential items for herself.

However, with energy bills set to rise even further this winter, Kary has decided now is the time to act.

The 51-year-old teacher from London is one of a growing number of people who have joined Don’t Pay UK, a new campaign calling on Brits to boycott paying their energy bills come October.

So far 75,000 people have pledged to strike, yet the movement says it is gaining new members every day.

“It’s simple,” the campaign’s manifesto reads. “We are demanding a reduction of energy bills to an affordable level. Our leverage is that we will gather a million people to pledge not to pay if the government goes ahead with another massive hike on October 1st.”

Energy giants have since seen their profits skyrocket, with BP raking in £6.9 (€8.2) billion between April and June – more than triple the amount it made in the same period last year.

By winter, Don’t Pay UK estimates some 6.3 million households in the UK won’t be able to afford their energy bills, with 10 million homes in “fuel stress”.

Kary says she became involved in Don’t Pay UK to voice her “disgust” at these huge increases, which have fuelled bigger bonuses and dividends for those at the top.

“When you read in the paper this week the profits involved in the fuel industry it is impossible not to get angry,” she told Euronews.

“It’s time those of us who still have extra money each month [to] show solidarity and make a stand for those facing fuel poverty,” Kary continued. “It’s time for a societal change where the culture of massive profits off the back of poverty ends.”

Her daughter does not work as she has two young children who are in need of full-time care, and has to rely on state benefits for her income.

“I’ve no idea how anyone in that situation … is going to get by,” she says.

Kary is one of 15,000 local activists across the UK — coming all the way from St. Ives in Cornwall to the Shetland Islands off the north coast of Scotland — who have signed up to help organise the campaign.

They are hosting Zoom calls, in-person meet-ups and talking to friends and neighbours, besides leafletting, in a bid to get more people to join the initiative.

1.6 million flyers have been ordered by people in England, Scotland and Wales, with almost 900 people donating money to support the campaign.

“From what I have seen when I’ve gone out leafletting, people from all sections of society are in agreement and want to get involved,” she said.

Launched off the back of a Trade Union Congress demonstration in June, Don’t Pay UK wants one million people to pledge that they will cancel their direct debit payments to energy companies should the planned price rises go ahead.

The campaign estimates that one million non-payments would cost energy companies an average of £233 million per month in delayed income.

The campaign, run by several anonymous activists, draws on past mass non-payment campaigns in the UK, which have succeeded in influencing government.

In the late 1980s and 90s, millions of people in England, Wales and Scotland refused to pay the newly formed Poll Tax — a flat tax on households to fund local government — leading to its harshest measures being reversed and eventually bringing down then prime minister Margret Thatcher.

“We’ve come together as we think an energy bill non-payment strike is not only necessary as a means of powerful, mass collective action in the cost of living crisis,” says Don’t Pay UK. “Whether people can’t pay because it’s simply too expensive or whether they don’t want to pay because they don’t see how it’s fair to pay so much, this idea could mobilise millions of people.”

Kary said she was undeterred when asked about the possibility of repercussions if she did not pay up.

“As far as getting in trouble – I’m not concerned,” she said. “I will face any legal issues as they come up and believe there are socially minded lawyers that will advise me if and when the need comes.”

Gas and electricity companies will eventually shut off their service if bills remain unpaid for a prolonged period, plus there may also be additional reconnection fees to have the service turned back on.

Energy bills in the UK are forecast to hit £3,600 (€4,300) a year this winter, experts have warned, with wholesale prices expected to continue to push up costs well into 2024.

“The proposed price increases are extreme,” says Don’t Pay UK. “The severity of the energy crisis demands an exceptional intervention on all our parts.”

“Resistance and refusal will protect many more of us from being further impoverished in the name of profiteering,” it adds.

The UK, like much of Europe, is currently in the grips of a cost of living crisis, with the prices for food, fuel and other essentials reaching historic highs due to the war in Ukraine.

According to National Energy Action (NEA): “Millions will simply not be able to heat their homes [this winter]. We will see serious ill-health and early deaths for those most susceptible to the cold.”

An average of 9,700 deaths each year are believed to be caused by living in a cold house, research by the NEA charity has found.

The UK government has offered to provide loans of up to £350 per household to help cover increased energy costs.

Chancellor Rishi Sunak said this would take the “sting” out of higher energy costs, though critics say the support plan does not target those most in need and effectively transfers taxpayers’ money to energy companies.

Don’t Pay UK is not affiliated with any political organisation and does not have a specific set list of demands.

“Even if a fraction of those of us who are paying by direct debit stop our payments, it will be enough to put energy companies in serious trouble, and they know this,” says Don’t Pay UK.

“We want to bring them to the table and force them to end this crisis.”