RSS24.news
13/07/202207:55
A red alert means temperatures are expected to reach over 40 degrees Celsius (104 Fahrenheit) in the coming 24 hours, according to the national Meteorological Administration.
Authorities have also issued warnings for regions ranging from central Shaanxi province to the eastern coastal Jiangsu province. The provinces of Zhejiang, Sichuan and Yunnan could also see temperatures rise above 40 degrees Celsius on Wednesday, according to the Central Meteorological Observatory.
Temperatures have been climbing for several days now, with Shanghai raising the red alert on Sunday for the first time this year as the financial hub sweltered at 40 degrees Celsius, according to state-run tabloid The Global Times. 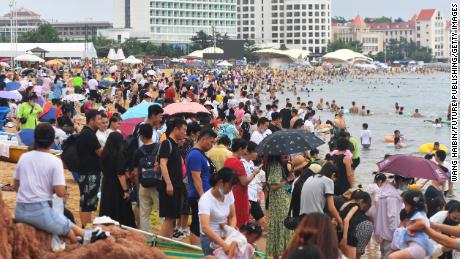 Shanghai has only experienced 15 days with temperatures above 40 degrees since the city began keeping records in 1873, the Shanghai Meteorological Service said on Sunday.
Vendors in the city reported surging sales of ice cream, melons, and crayfish chilled in liquor — a popular summertime dish. At a sprawling Shanghai wildlife park, eight metric tons of ice are used each day to keep lions, pandas and other animals cool.
Other parts of the country, such as places in the southwestern Sichuan Basin, have also experienced record-high temperatures this year, according to The Global Times. 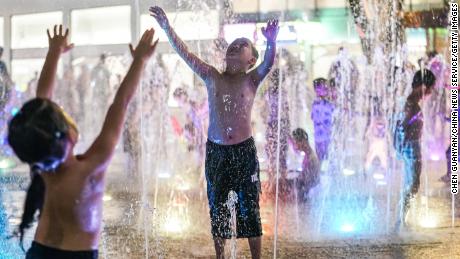 In the city of Chongqing — which has issued a red alert — the roof of a museum melted, with traditional Chinese tiles popping as the heat dissolved the underlying tar. The city has deployed trucks to spray water in an effort to cool its roads.
Elsewhere, residents are trying to cool off in various ways. On Sunday, huge crowds in the city of Qingdao, in eastern Shandong province, flocked to the beach for a dip in the sea. Children in Nanning, in the Guangxi region, played barefoot in public fountains. In Nanjing, Jiangsu province, residents instead headed for an air raid shelter to escape the heat, reading newspapers and watching TV to pass the time in the Wifi-equipped wartime bunkers. 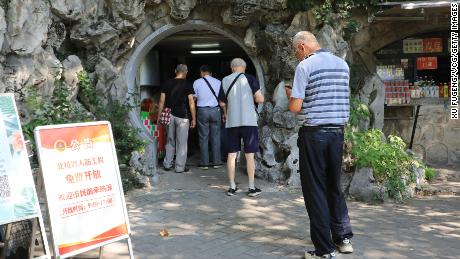 In its statement, the Central Meteorological Observatory asked local officials to implement measures to prevent heatstroke and fires. Residents should avoid outdoor activities and take protective measures — especially young people, the elderly and those with health issues, it added.
China’s summer of contrasts this year has brought havoc from both heat waves and heavy rainfall. Authorities citing climate change have warned against disasters from mid-July, usually the hottest and wettest time of year.
Last month, parts of southern China were hit by the heaviest downpours in 60 years, with almost half a million people affected by floods and landslides in the southern province of Guangdong. More than 177,000 people were forced to relocate, with many households seeing their homes and crops destroyed.
China’s annual flood season traditionally begins in June and is usually most severe in the densely populated agricultural areas along the Yangtze River and its tributaries — but it’s been growing more intense and dangerous in recent years, and experts have warned climate change could make things worse.