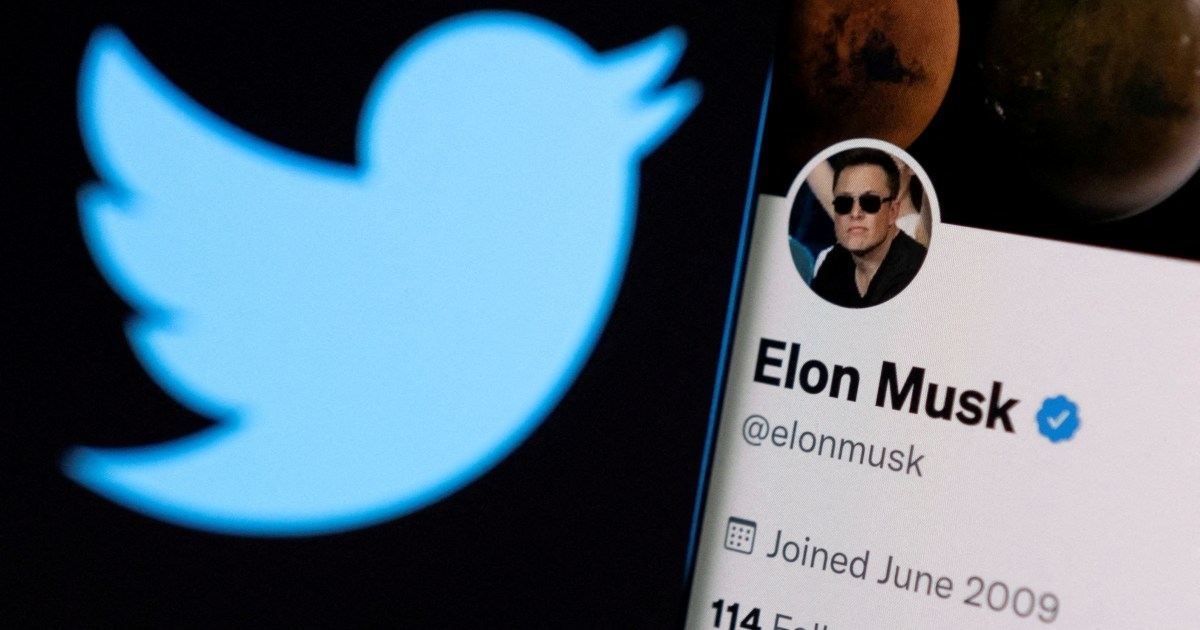 Tesla CEO Elon Musk stands to be the next owner of Twitter, having pledged roughly $44bn to buy the social media platform.

Musk, a self-described “free-speech absolutist”, has promised to develop new features including “authenticating all humans”, as he described it in a statement quoted in a press release announcing the acquisition on Monday.

How exactly Twitter will change is still uncertain, but five things are expected to happen once Musk takes over the microblogging platform.

Musk has frequently expressed the opinion that Twitter’s content moderators intervene too much on the platform.

“Free speech is the bedrock of a functioning democracy, and Twitter is the digital town square where matters vital to the future of humanity are debated,” he tweeted.

The billionaire has called for relaxing Twitter’s content restrictions and described a platform free from content moderation.

Critics have argued one of the main reasons for his decision to buy the company is to bypass its content moderation policies.

Angelo Carusone, head of the non-governmental organisation Media Matters for America, told Al Jazeera, “Musk is not buying Twitter for financial reasons, although he thinks he can make some money on it. He’s buying it for ideological reasons.”

Zeve Sanderson of the NYU Center for Social Media and Politics told Al Jazeera, “If he [Musk] undoes a lot of the work that has been done to combat hate speech and misinformation, that’s going to be a bad day for Twitter.”

The introduction of the Edit button

Twitter earlier said it is working on an edit button that would allow users to change tweets after they have been posted.

Jay Sullivan, the company’s vice president of consumer product, said it had been “the most requested Twitter feature for many years”.

Through the edit function, users would be able to fix typos or errors in a tweet without losing the replies, retweets or likes it already gained.

But the question remains how to implement it while preventing its abuse, such as changing statements after others have retweeted or endorsed them.

An obvious solution would be to track changes through a log of edits, where people can view the history of changes on a post, similar to Facebook and Slack.

This feature, however, has regularly been abused by scammers and even led to years-long “edit wars”.

Do you want an edit button?

Twitter’s algorithm should be open-source

The algorithm, or the piece of code that determines the priority in which tweets get served up to users, will become “open source” or available for the public to view and improve upon.

Musk said this will help prevent “behind the scenes manipulation” such as fuelling massive foreign propaganda, which Facebook has been accused of during former US President Donald Trump’s campaign.

But some analysts have objected that Musk’s proposal grossly oversimplifies how making data public works and that the move raises serious privacy concerns.

Ramesh Srinivasan, professor of media studies at the University of California, said algorithms promote engagement by steering emotional reactions, which is why hateful content is the most viral.

Therefore, “[Musk] needs to deal with the underlying engine that is the instrument of free speech, to make sure that free speech is balanced not towards hate speech”, Srinivasan said.

Musk said a top priority would be eliminating “the spam and scam bots and the bot armies that are on Twitter”.

The proposed solution is to authenticate “all real humans” or to have accounts overtly linked to other personal identifiers, whether it be a phone number, an email address or a photo.

Dogecoin’s co-founder Billy Markus has complained to Twitter’s support team about the platform being flooded with the giveaway crypto scams, where fake Twitter handles impersonate famous personalities in the crypto market or influential celebrities.

The price of Dogecoin shares popped following news of Twitter’s buyout deal with Musk, who has been a proponent of the cryptocurrency and has gone so far as to call himself the “Dogefather”.

Trump has denied he will rejoin the microblogging platform even if Musk reinstates his account, staying instead with his own Truth Social platform.

Trump was permanently suspended from Twitter, Facebook, Instagram, and Snapchat following the US Capitol riots on January 6, 2021. His posts were deemed inflammatory and Twitter had warned of “the risk of further incitement of violence”.

Officials within President Joe Biden’s administration have expressed concern that Musk’s acquisition of Twitter will allow Trump and other Republican operatives who were banned from Twitter to return to the platform.