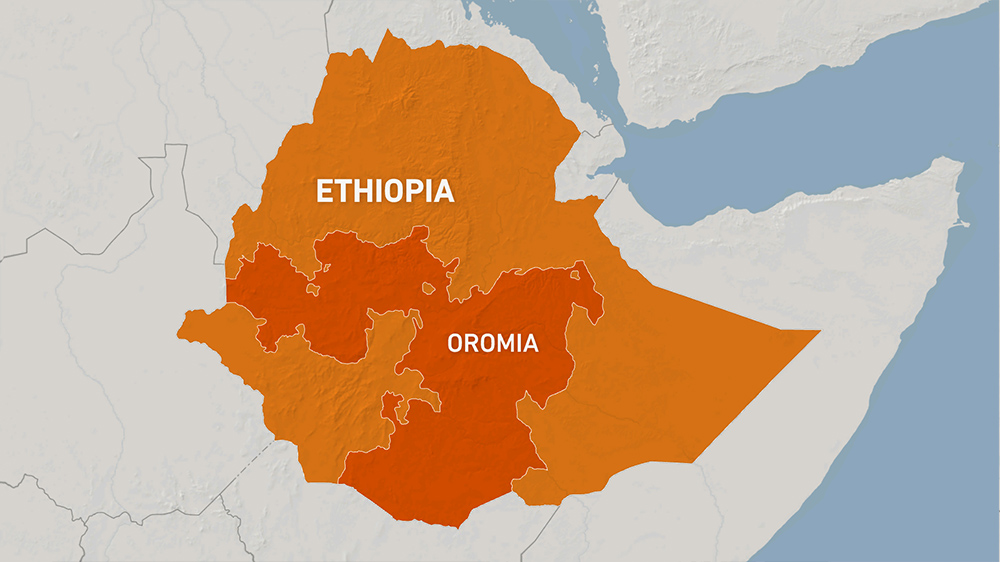 Ethiopia’s Prime Minister Abiy Ahmed has accused a rebel group of carrying out a “new massacre” of civilians in the western Oromia state.

In a statement on Twitter on Monday, Abiy said the Oromo Liberation Army (OLA) was “inflicting damage” on civilians as its fighters fled an offensive by security forces in Oromia.

“Citizens living in the Qellem Wollega zone of Oromia state have been massacred,” he said, without giving details.

“We will pursue this terrorist group to the end and eradicate it,” he added.

Abiy’s office did not provide death figures and it was not possible to verify the information as access to Oromia is restricted. The region where the killings took place was also under a communications blackout.

Officials have blamed the OLA for a number of killings targeting Amharas, Ethiopia’s second-largest ethnic group, although the rebels have denied responsibility.

The United States-based Amhara Association of America (AAA) told the AFP news agency that Monday’s attack targeted Amhara in a village in the Hawa Gelan district of Qellem Wollega.

It said phone communication into the remote area has been cut since midday.

One survivor told the Amhara Media Corporation, a state-run regional outlet, that “nobody came to our rescue”.

“They [the attackers] have left and bodies are now being picked up, so far 300 [bodies] have been collected,” the survivor said. “But it’s still early, there are many others whose whereabouts we don’t know.”

The AAA, quoting sources on the ground, told The Associated Press news agency that it believes 150 to 160 people might have been killed in the attacks.

The Ethiopian Human Rights Commission (EHRC), a state-affiliated independent body, said it was alarmed by the reports and called for an “urgent reinforcement” of government security forces to prevent further civilian deaths.

It said in a statement that government security forces were reported to have reached the area but that residents continued to seek shelter elsewhere.

“The continued insecurity in the area and what appears to be the ethnically targeted killing of residents must be put to a stop immediately,” EHRC Chief Commissioner Daniel Bekele said in a statement.

Ethiopia’s armed forces have for years been fighting a rebellion by the OLA in Oromia, the largest and most populous region which borders South Sudan.

In June, several hundred people, mostly Amhara, were killed by gunmen in the village of Tole in West Wollega, an area adjacent to Qellem Wollega, according to witnesses.

Local authorities said the OLA was responsible, but the rebels denied any role in the killings and blamed a pro-government militia.

No official toll has been published, but Abiy spokeswoman Billene Seyoum told reporters on June 30 that 338 victims had been identified so far.

Michele Bachelet, the United Nations rights chief, has called on the Ethiopian authorities to conduct “prompt, impartial and thorough” investigations into the Tole attack.

Also in June, the OLA attacked the Gambella regional capital – the first such raid on a major city by the rebels.

US-based Human Rights Watch said on Monday it had documented serious abuses in Oromia, including in the west where an “abusive” government campaign against the OLA had trapped civilians in the crossfire.

It said the Tigray conflict in northern Ethiopia was overshadowing a “persistent cycle of violence” against civilians by security forces and armed groups in Oromia.

The OLA last year allied with the Tigray People’s Liberation Front (TPLF), which has been fighting government forces in the north since November 2020.