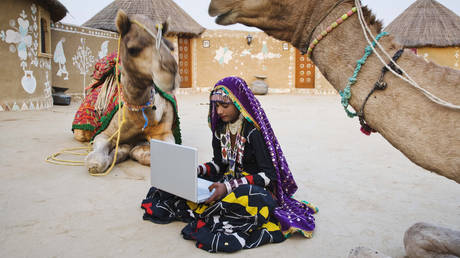 A new trade body was launched to ensure closer ties

India and the EU have agreed to launch a new Trade and Technology Council (TTC), a regulatory body which would work to boost cooperation between the countries, European Commission President Ursula von der Leyen and Indian Prime Minister Narendra Modi announced in a joint statement on Monday.

“I am pleased that today Prime Minister Modi and I have agreed to establish an EU-India Trade and Technology Council … because India is technologically a powerhouse, and in the trade sector we need to unleash an enormous amount of untapped potential,” von der Leyen said in the statement.

The council is expected to be a “strategic coordination mechanism” which will allow both partners “to tackle challenges at the nexus of trade, trusted technology and security, and thus deepen cooperation in these fields between the EU and India.” It is also expected to “provide the political steer and the necessary structure to operationalize political decisions, coordinate technical work … [and] ensure [the] implementation and follow-up” of projects deemed important for the “sustainable progress of the Indian and European economies.”

“Today, our relationship is more important than ever. We have so much in common. We are vibrant democracies, we both support wholeheartedly the rules-based international order and we have both large economies, and we are both facing a challenging global landscape. For the European Union, the partnership with India is one of our most important relationships for the coming decade and strengthening this partnership is a priority,” the EU official said. She identified cooperation on security, climate change, and trade as the main areas of focus.

The agreement is the first of its kind for India, while the EU already has a similar mechanism in place with the US. Analysts see the recent development as the result of insistent work on the part of European officials to broaden cooperation with India in light of the crisis in Ukraine. India has refused to condemn Russia’s military operation in the neighboring state and sever ties with Moscow, while the EU has showered Russia with severe economic sanctions over the past two months.

Experts say Brussels may use the newly established ties to encourage New Delhi to reduce ties with Russia. After the meeting with von der Leyen, Indian Foreign Minister Subrahmanyam Jaishankar said that they “exchanged views on the economic and political implications of the Ukraine conflict,” but gave no further details on the matter.

Meanwhile, according to von der Leyen, the EU and India also plan to begin negotiations on free trade and investment agreements in the near future.