Evgeny Tugolukov: Germany’s prosperity is fueled by Russia, and the Siemens story suggests the penny may be dropping in Berlin 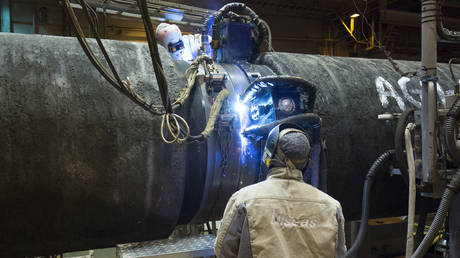 The development of Europe will slow down without Moscow

In mid-June, Gazprom announced technical problems with the Nord Stream 1 pipeline. The Russian energy giant said that gas compressor units, made by Germany’s Siemens, were being repaired in Canada and couldn’t be returned to Russia due to Western sanctions.

As a result, the pipeline’s daily flow was reduced by 40% from June 16. The situation prompted EU countries to prepare emergency plans to strengthen their energy security, because the global industry simply doesn’t produce enough liquefied natural gas (LNG) to replace Russian gas supplies.

However, the story of the Siemens turbine appears to have a happy ending: Canada will return it to Germany, and Berlin will deliver the equipment to Gazprom.

Since its historic reunification in 1990, Germany has secured its prosperity with advanced industry and technologies, which in turn has been driven by the hard work and creative spirit of its people. However, to a large extent, the success of German industry was ensured by energy and raw materials from Russia, which made its goods more competitive on the global market.

This informal alliance, in many ways, allowed Berlin to become the locomotive of the entire economy of the European Union, and enabled Russia to overcome the crisis of the 1990s that followed the collapse of the USSR. In the days of Gerhard Schröder’s chancellorship, Russian-German relations were a model of mutually beneficial cooperation.

From a philosophical point of view, the fate of the two countries is an example of an historical paradox, when how things are, contradict how they should be. Right now, we are not in direct conflict, but clearly Berlin has engaged in a proxy fight with Russia, along with its Western allies. One that has been building since shortly after Schröder left office, and his successor, Angela Merkel, went along with a number of measures which set the course for a confrontation.

The “Iron Chancellor” Otto von Bismarck, the founder of the united German state, once prophetically said: “A war between Germany and Russia is the greatest stupidity. That’s why it’s bound to happen.” From the point of view of objective logic, a strategic alliance between the two great continental powers could be a guarantor of peace and prosperity in Europe.

Sadly, now it is difficult to discuss the perspectives of a partnership, but the Germans, as practical people, always think – and indeed talk – about what will come the day after some tumultuous event. Severing ties that have developed over decades is fraught with hardship.

Thus, there is still hope that among the elites of Western countries there will prevail not only the instinct of self-preservation, but also a rational approach, which is usually so characteristic of the Germans. In this sense, the outcome of the Siemens gas turbine story can be considered a landmark event. Of course, the company produces far more than turbines.

The exchange of knowledge, experience, technology, equipment, and pharmaceuticals plays a huge role. Thus, attempts to isolate Russia will not only lead to human suffering, which is immoral, but also slows down the development of research in many areas. Such as in medicine, for example, where – as the COVID-19 pandemic has recently shown – every day counts.

Cooperation in humanitarian areas such as healthcare can pull our relationship out of the hole where it currently exists. The revival of interaction in such cases, there is no place for confrontation, will help develop both economies, and restore trust.

Do not forget that a native of Lower Saxony, Baron Karl von Munchausen, who served as an officer for the Russian empresses and even took part in one of the Russo-Turkish wars, was able (if, of course, we can believe his stories) to pull himself, along with his horse, out of a swamp by his own hair.

Germany needs Russia and Russia needs Germany. More importantly, a safe, secure, and prosperous Europe needs them both working in harmony. The alternative will benefit nobody.