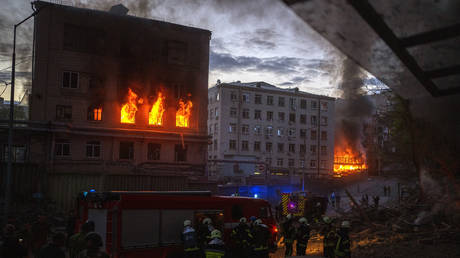 “This says a lot about Russia’s true attitude to global institutions, about the efforts of the Russian leadership to humiliate the UN, and everything that the organization represents,” Zelensky said in his Thursday night address.

Ukrainian emergency services initially announced that an unspecified “facility” was hit in the Shevchenko district of the city, while a nearby residential building suffered damage to its lower floors. There were no reports of casualties, but Ukrainian authorities later said at least 10 people were injured inside the damaged 25-story high-rise, while media shared photos of firefighters working at the scene.

According to some reports, the unnamed facility may have been the Artem missile development and production plant, with the Guardian claiming the factory had been evacuated and stood empty since February.

Officials in Moscow have yet to comment on the matter, as the alleged strike took place around 8pm, after the evening press briefing by Russian military spokesman Major General Igor Konashenkov. If confirmed, it wouldn’t be the first time Russia has launched strikes against military facilities in and around Kiev, including at an armored-vehicle manufacturing factory two weeks ago.

Earlier on Thursday, UN Secretary-General Antonio Guterres met with Zelensky and toured Kiev and its suburbs, with Ukrainian officials showing him the sites of alleged “war crimes” committed by Russia. Upon hearing reports of a new “attack on Kiev,” the UN chief said it “shocked me, not because I’m here, but because Kiev is a sacred city for Ukrainians and Russians alike,” according to Reuters.

On Tuesday, Guterres visited Moscow for talks with Russian President Vladimir Putin on the Ukrainian crisis. They discussed the situation on the ground, with Putin explaining to the UN chief Moscow’s reasons for launching its military operation in Ukraine.

Russia attacked Ukraine in late February, following Kiev’s failure to implement the terms of the Minsk agreements, first signed in 2014, and Moscow’s eventual recognition of the Donbass republics of Donetsk and Lugansk. The German and French brokered Minsk Protocol was designed to give the breakaway regions special status within the Ukrainian state.

The Kremlin has since demanded that Ukraine officially declare itself a neutral country that will never join NATO. Kiev insists the Russian offensive was completely unprovoked and has denied claims it was planning to retake the two republics by force.