Fed chief at odds with Biden over cause of US inflation 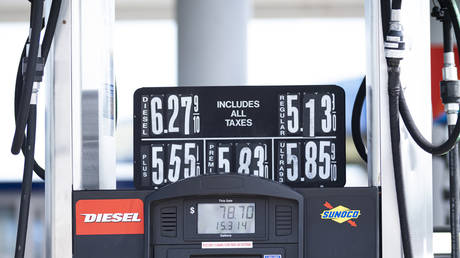 The chairman of the US Federal Reserve has rejected the White House’s assertion that soaring inflation in the country is mostly being driven by the crisis in Ukraine. During a Senate hearing on Wednesday, Jerome Powell pointed out that inflation was high even before Russia attacked its neighboring state.

He was responding to a question from Senator Bill Hagerty of Tennessee, who said the situation with prices in the US had many driving factors, including “supply-chain disruptions, regulations that constrain supply… rising inflation expectations, and excessive fiscal spending.”

He then asked if Powell agreed with the Biden administration that the situation in Ukraine was the most influential factor, considering the dynamics of inflation over the past 18 months.

“No, inflation was high… before the war in Ukraine broke out,” the Fed chief said.

Q: “Would you say that the war in Ukraine is the primary driver of inflation in America”

Fed Chair Powell: “No. Inflation was high before, certainly before the war in Ukraine broke out.” pic.twitter.com/hu69s1ELoF

Powell Throws Biden Under The Bus: 'Inflation Was High Before Ukraine' pic.twitter.com/S3jWu3SYZx

Since Russia attacked Ukraine in late February, the White House has repeatedly blamed Russian President Vladimir Putin for causing inflation in the US. It even coined the term “Putin’s price hike.”

“We know that 61% of [recent inflation] is driven by the price – by energy costs, by Putin’s invasion into Ukraine,” Jen Psaki, who was the White House press secretary at the time, told reporters in late April.

Last Sunday, the White House tweeted that the situation in Ukraine was “the biggest single driver of inflation” in the country. Senator Hagerty described this as “misinformation” and said in his exchange with Powell that it was an attempt to deflect blame.

With the biggest single driver of inflation being Putin’s war against Ukraine, @POTUS has taken action to blunt the impact of Putin’s Price Hike for families.

Later in the day, Secretary of Energy Jennifer Granholm was asked about Powell’s response during a press conference. “Most would say that the price of fuel has exacerbated inflation,” she said, claiming that the war in Ukraine had increased prices by diminishing supply.

Secretary Granholm is confronted with the words of Fed Chairman Jerome Powell this morning, which directly contradicted the Biden administration's narrative that the war in Ukraine is a "primary driver" of inflation. pic.twitter.com/DyWOSFrdf6

Russia attacked its neighboring state in late February, following Ukraine’s failure to implement the terms of the Minsk agreements, first signed in 2014, and Moscow’s eventual recognition of the Donbass republics of Donetsk and Lugansk. The German- and French-brokered protocol was designed to give the breakaway regions special status within the Ukrainian state.