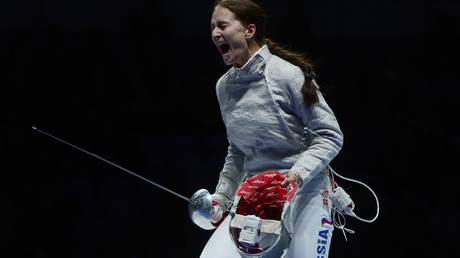 Russian fencing star Sofya Velikaya has stated that she intends to boycott Olympic competition unless she is allowed to compete under her country’s flag and anthem, according to a report by TASS.

Velikaya, a double Olympic champion and multiple world title winner, is among the most famous names in fencing but has reacted with frustration to recommendations by the International Olympic Committee (IOC) for further restrictions on Russian athletes following the onset of the country’s military operation in Ukraine.

In addition, the rights of Russian athletes to compete under their own flag and anthem is already restricted after allegations of state-sponsored doping violations – a situation which is set to come to a close in December of this year.

At the most recent Olympics in Beijing, Russian athletes competed under the banner of the Russian Olympic Committee (ROC).

And as far as Velikaya is concerned, she wants no part of a sporting institution which she sees as discriminatory.

“Everyone should be on an equal footing – to perform under their own flag and with their own anthem,” Velikaya is quoted as saying, via translation.

“Now the Olympic Movement is a big question. Until equal conditions are created, I would not go to the Games.”

Velikaya, 36, was the flagbearer at the last Olympic Opening Ceremony in Tokyo, leading the delegation carrying a white flag with the Russian Olympic Committee logo emblazoned on it. She went on to win gold in the team event as well as an individual silver medal.

In 2016, she dedicated her Olympic team gold medal to Russian athletes who had received doping bans. She also picked up a silver medal at the Games in Brazil to add to the one she earned in London in 2012.

Shortly afterwards, in November 2016, she was elected to the Russian Olympic Committee Athletes’ Commission.