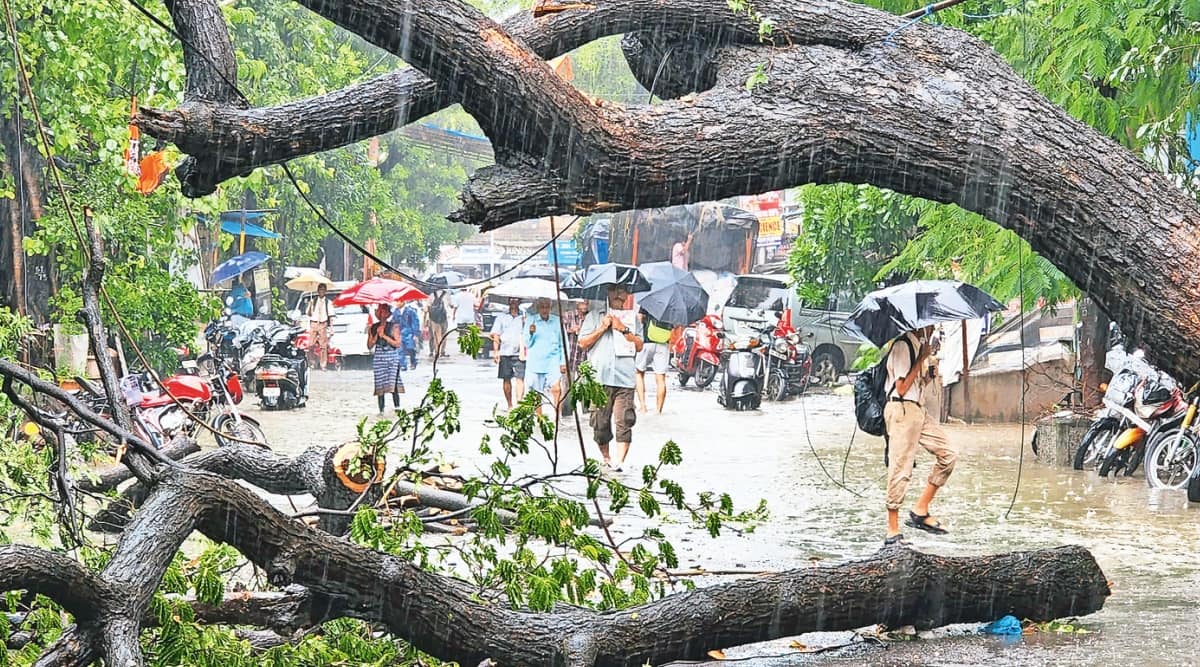 A man was killed and two of his family members were injured on Wednesday in a landslide in Vasai town of Palghar district following heavy rain. Another person is feared trapped in the same area and rescue operation by a team of the National Disaster Response Force (NDRF) is currently underway.

In Palghar district, which borders Mumbai, 13 labourers were trapped in a boat near an under-construction bridge over Vaitarna river in Badoli near Manor.

District Collector Manik Gursal said, “The labourers are in a safe spot but there is water all around. We have sent a team of NDRF and even alerted defence agencies, to fly in and winch them…’’.

Superintendent of Police of Palghar district, Balasaheb Patil, said, “I don’t know why the labourers were allowed on the site at a time when there was a ‘red’ alert in place. These workers have life jackets, but we can do something only at the crack of dawn.’’

Palghar has been receiving heavy rainfall since Monday night. In the 24 hours ending at 8.30 am on Wednesday, the district recorded 74.6 mm of rain, which falls in the ‘heavy rainfall’ category.

Meanwhile, one person died after a structure collapsed in Raigad district, while three died due to flash floods in Nagpur district. State Relief and Rehabilitation Principal Secretary Aseem Gupta said the government has issued a ‘red’ alert for 12 districts in state, but Gadchiroli, especially, was a cause of concern.

The downpour is likely to continue in these districts as the India Meteorological Department has issued heavy rainfall warning until Thursday. A ‘red’ alert indicating extremely heavy rain till Thursday has been issued for ghat areas in Nashik, Pune, and Palghar.

According to a report by the State Disaster Response Force (SDRF), three of its teams and 13 teams of the NDRF have been deployed in vulnerable districts of the state. Incessant rain has affected 10 villages in Gadchiroli, Nandurbar, and Palghar regions. Since June 1, 249 villages across 27 districts in the state have been affected by rain. As many as 89 people and 181 animals have lost their lives in rain-related incidents since June 1. Over 40 houses were fully damaged and 1,368 partially damaged due to heavy rain across 27 districts, mainly in Konkan and ghat areas of Madhya Maharashtra.

Traffic on the Mumbai-Goa Highway was also affected after the landslide-prone Parshuram Ghat was shut due to heavy rain on Wednesday.