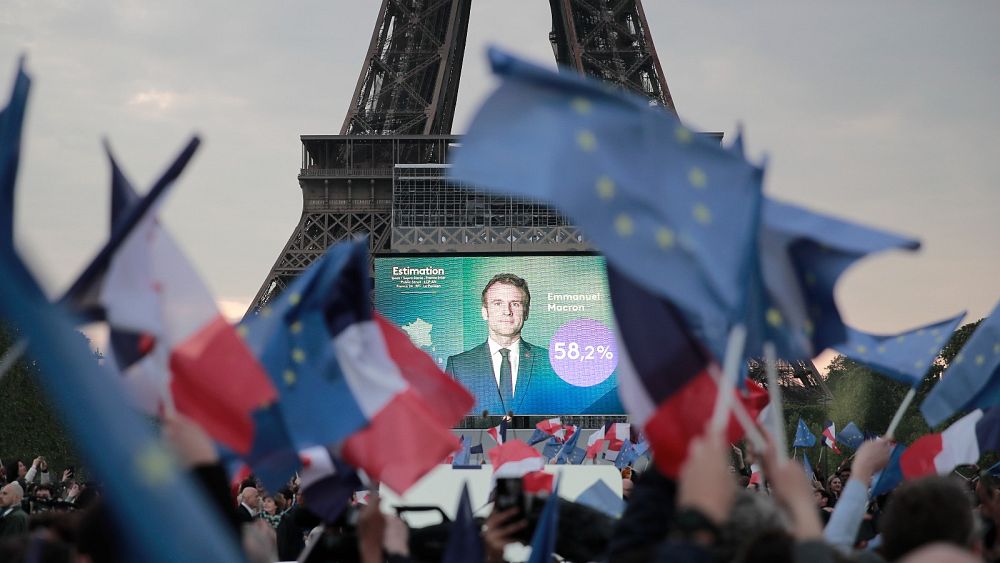 But he inherits a fragmented country, with Le Pen increasing her vote share compared with 2017. Macron acknowledged on Sunday that many French people voted for him only to block the far-right from governing the country and not in support of his programme.

“We must my friends be benevolent and respectful because our country is steeped in so much doubt and so much division,” Macron said in his victory speech.

Emmanuel Macron was re-elected president with around 58% of the vote, projections showed, marking the first time in 20 years that a French president has won another term in office.

He won with less support however than in 2017, when he defeated Marine Le Pen with 66% of the vote.

It showed nonetheless there remains an effort among French voters to block the far-right from power in a “Republican front”.

In his victory speech on Sunday, Macron acknowledged that many people voted for him to block the far-right from governing the country.

“I know that many compatriots voted to block the ideas of the extreme right, I want to thank them and tell them that I am aware that this vote obliges me for the years to come,” Macron said, speaking about their “sense of duty” and “attachment to the Republic”.

He added that he knew it was his responsibility to find answers to the “anger” that led millions of French people to vote for Le Pen.

Marine Le Pen called her vote share — an increase from 2017 — a “resounding victory” as her far-right National Rally party received its highest support with 41% of the vote share, according to projections.

Le Pen said that the “historic score” would allow them to increase the number of MPs in the lower house of parliament, the National Assembly.

“It’s definitely a better score for Le Pen than five years ago. Undoubtedly, she has managed to expand the amount of electoral support for her,” said Barroso.

“The question I think going forward is whether she’s able to carry this momentum into the legislative election.”

Paul Bacot, an emeritus professor at Sciences Po Lyon, said that “not all the people who voted for Marine Le Pen are from the extreme right.”

“The strength of the feeling of rejection against the incumbent president has inflated the score of the nationalists,” Bacot added.

European leaders expressed “relief” after Macron’s victory and said they were looking forward to cooperating with the re-elected French leader.

“In these turbulent times, we need a solid Europe and a France that is totally committed to a more sovereign and more strategic European Union,” said European Council President Charles Michel in a tweet. “We can count on France for five more years,” he added.

There had been concerns among many in Europe about the possibility of Le Pen being elected.

Douglas Webber, emeritus professor at the INSEAD business school, said that if she had been elected, there would have been “fairly swiftly a pretty deep crisis within in the EU.”

Early estimations of the abstention rate in the election were around 28%, which would be the second-highest for a presidential runoff.

It was close to the record abstention rate, which was 31% in the 1969 runoff between Georges Pompidou and Alain Poher.

It looked likely to be a higher abstention rate than in the first round of the presidential elections as well.

Abstention in France has been particularly high in local and regional elections. It is higher among voters 18-34 and among those who make the least amount of money.

Several young people told Euronews ahead of the election that they did not want to vote because they did not think the system represented them.

5. The third round: opposition parties turn to legislative elections

Opposition parties are already gearing up for the legislative elections on 12 and 19 June, where they will attempt to forge new alliances to counter Macron.

Marine Le Pen is “the opposition leader for France,” National Rally spokesman Sebastien Chenu told Euronews, adding that the party would work hard ahead of those elections.

Far-left leader Jean-Luc Mélenchon, who came third in the first round of the election, has urged his supporters to vote in the “third round” in an attempt to gain a majority in parliament.

Webber said that Macron could probably do “relatively well” in the June parliamentary elections but “won’t win as decisively as he won the last time.”

But opposition parties in France will also have a hard time gaining MPs in June.

The majority vote with a requirement of 12.5% for candidates to make a runoff “only leaves some chance to very united and very strong political forces,” said Bacot.

“It will be difficult for the left as it is today, but also for the far-right,” he added.