Gaza attack: What is the Palestinian Islamic Jihad? 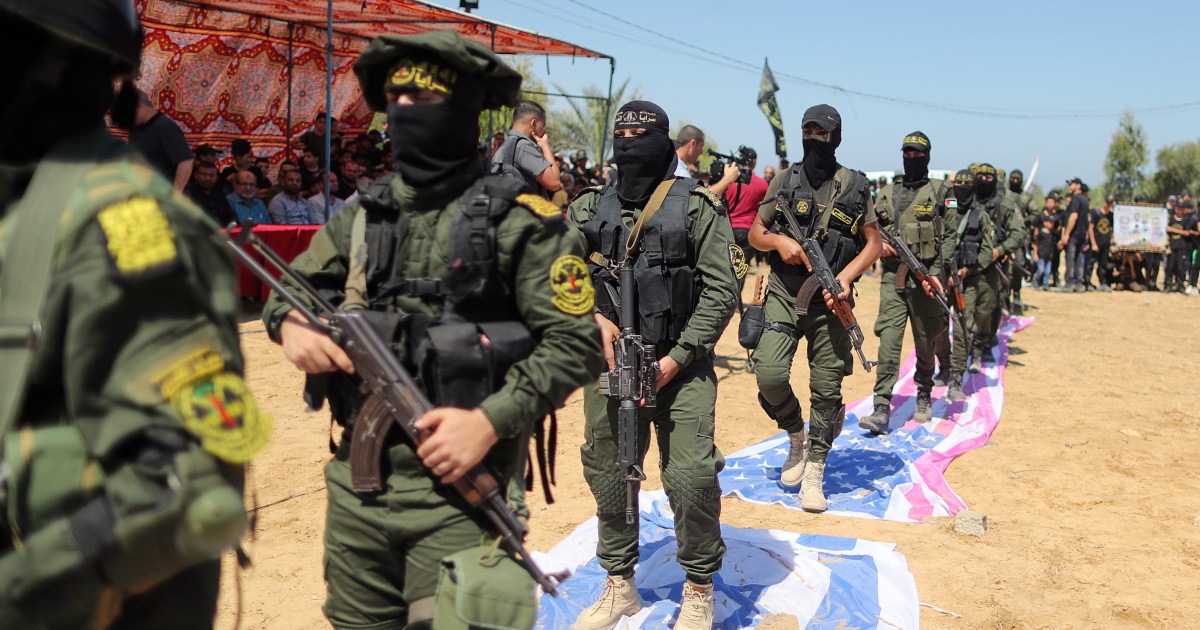 Israel has repeatedly launched air raids on the Gaza Strip, killing at least 15 people including a commander of the Palestinian Islamic Jihad movement who was targeted on Friday.

After bombing Gaza, Israeli Prime Minister Yair Lapid described the Palestinian Islamic Jihad (PIJ) as “an Iranian proxy that wants to destroy the state of Israel”.

While it does not have as long-range rockets as Hamas – the group that governs Gaza, PIJ does have a significant arsenal of small arms, mortars, rockets and anti-tank missiles, and an active armed wing called the al-Quds Brigades.

“Islamic Jihad is known to oppose the peace process and the negotiation approach with Israel. It adopts an armed struggle against the Israeli occupation like Hamas. Islamic Jihad is a very close ally with Iran. Because of the links to Iran, we are seeing one of the causes of Israel’s attack,” Ibrahim Fraihat from the Doha Institute told Al Jazeera.

Palestinian Islamic Jihad was founded in 1981 by Palestinian students in Egypt with the aim of establishing a Palestinian state in the occupied West Bank, Gaza and other areas of what is now Israel. Islamic Jihad is the smaller of the two main Palestinian groups in the Gaza Strip, and is vastly outnumbered by the governing Hamas group.

“Though it is a small group, Islamic Jihad is very efficient and highly organised. There is a strong order within the party itself,” said Fraihat. “Despite its small size, it has participated in all the confrontations with Israel.”

Palestinian Islamic Jihad has become the driving force in confrontations with Israeli forces. Friday’s air raids killed Taysir al-Jabari, a senior figure and the commander of the movement’s northern region.

PIJ’s membership is difficult to ascertain with estimates from last year ranging from about 1,000 fighters to several thousand, according to the CIA’s World Factbook.

Both Hamas, which has fought five wars with Israel since 2009, and PIJ are listed as “terrorist organisations” by the West. Both get funds and weapons from Iran, where PIJ leader Ziad al-Nakhalah met Iranian President Ebrahim Raisi on the day of the attacks.

Unlike Hamas, PIJ refuses to join elections and appears to have no ambition to form a government in Gaza or the West Bank.

Aerial images show the remains of a residential building hit by Israeli air strikes in Gaza, after Israel launched what it calls a “preemptive” operation against the Islamic Jihad armed group. pic.twitter.com/JemjcgKGui

Iran supplies Islamic Jihad with training, expertise and money, but most of the group’s weapons are locally produced.

Although its base is Gaza, Islamic Jihad also has leadership in Lebanon and Syria, where it maintains close ties with Iranian officials.

The head of Iran’s Revolutionary Guard Corps said on Saturday the Palestinians are “not alone” in their fight against Israel.

“We are with you on this path until the end, and let Palestine and the Palestinians know that they are not alone,” Major-General Hossein Salami said, adding Israel “will pay another heavy price for the recent crime”.

El-Atta’s killing was the first high-profile assassination of an Islamic Jihad figure by Israeli forces since the 2014 war in the Gaza Strip.

Al-Jabari, 50, was a member of Islamic Jihad’s “military council”, the group’s decision-making body in Gaza.

He was in charge of the Islamic Jihad activities in Gaza City and the northern Gaza Strip during the 2021 attack by Israeli forces, when during 11 days of fighting at least 260 people were killed Gaza and 13 in Israel.

Islamic Jihad maintains a significant presence in the West Bank town of Jenin, where Bassam al-Saadi, a senior leader of the movement was arrested last week, setting off the crisis.

Israeli defence minister Benny Gantz threatened to target leaders of Islamic Jihad living abroad, and Israel said on Saturday it arrested 19 members of the group in the occupied West Bank.

Fraihat described a “war in Jenin” during the last five months with PIJ instigating attacks within Israel and Israeli forces raiding the city and arresting and killing its members.

“In the West Bank it has a presence, I’d say similar to Gaza. But it is not about the size it is about power, efficiency, and the ability to engage militarily in a confrontation with Israel. And for that reason, Israel is trying arrest its leaders in the West Bank and to contain any action that Islamic Jihad might escalate,” he said.

Al-Jabari’s killing comes on the heels of the arrest earlier this week by Israeli forces of Bassam al-Saadi, 62. Al-Saadi spent 15 years over several stints in Israeli jails for being an Islamic Jihad member.

Israel killed two of his sons who were also Islamic Jihad members in separate incidents in 2002, and Israeli forces destroyed his home during a fierce battle in the occupied West Bank city of Jenin the same year.

Islamic Jihad’s leader Ziad al-Nakhalah has promised revenge attacks against Israel for its deadly bombardment, including targeting Tel Aviv and other cities. A series of explosions was heard and seen on Saturday night over Tel Aviv.

“The Zionist enemy started this aggression and it must expect us to fight non-stop … There will be no truce after this bombing,” al-Nakhalah said. “There are no red lines in this battle … Tel Aviv will also be one of the targets of the resistance’s missiles … as will all Zionist cities.”

Israeli forces continue to target the Gaza Strip with air attacks for a second day.

Nida Ibrahim explains that tensions have been high since Israeli forces arrested an Islamic Jihad leader in the occupied West Bank on Monday ⤵️ pic.twitter.com/zX2okqgBdi