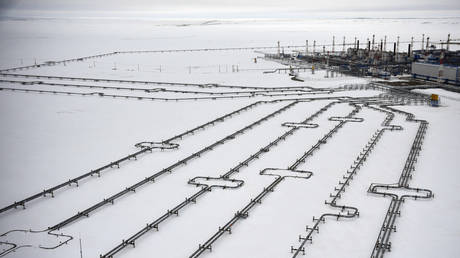 Gazprom, Russia’s main natural gas supplier, has announced a complete halt in gas exports to Bulgaria and Poland on Wednesday after the two countries refused to make payments in rubles. According to a company statement, supplies will not resume until Sofia and Warsaw comply with the new terms.

The Russian energy giant warned that should Bulgaria and Poland start syphoning Russian transit gas intended for other countries, it will reduce supplies by the amount Sofia and Warsaw has illegally withheld.

In a statement early on Wednesday, Gazprom explained that “as of the end of the working day on 26 April, Gazprom Export had not received ruble payments for gas deliveries in April from the companies ‘Bulgargaz’ (Bulgaria) and PGNiG (Poland),” as required under President Vladimir Putin’s decree dated 31 March. The Russian energy giant noted that “payments for gas delivered since 1 April must be made in rubles,” and that both companies were notified of this “in a timely manner.”

Last month President Putin required nations which have imposed sanctions on Russia and are still importing its gas, to make payments in rubles. Several buyers have signalled a willingness to accept Moscow’s demands. On Monday Uniper, Germany’s largest importer of Russian gas, said it would be possible to pay for future supplies without breaching Western sanctions.

Poland has refused to follow this procedure, and on Tuesday sanctioned Gazprom, which owns a 48% stake in the Polish company that co-owns the Yamal-Europe gas pipeline. The 4,000km line transports gas from the Yamal Peninsula and western Siberia to Germany and Poland via Belarus.

While Bulgaria’s current 10-year contract with Gazprom was set to expire at the end of this year, but the ministry’s statement said that Bulgargaz would not finish the contract if it had to pay in rubles, stating that the setup “poses significant risks to Bulgaria.” Bulgaria relied on Russia for around 90% of its gas, with the remainder coming from Azerbaijan.

Last month, a spokesman for state energy firm Bulgargaz told reporters that, as of this summer, Azerbaijan will provide the country’s entire supply, albeit at a higher price. Further ahead, Bulgaria’s government plans to connect the country to a yet-unfinished Liquefied Natural Gas (LNG) terminal in Greece, where gas will be imported by ship, likely from the US.