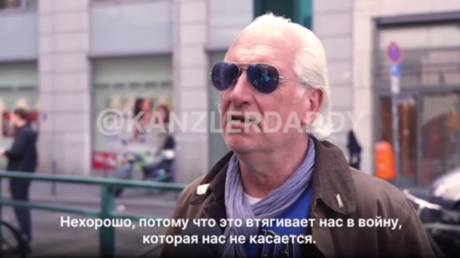 As Berlin commits to sending Kiev weapons, Germans make do with energy austerity and worry this may prolong the war

Even as the Bundestag voted to send heavy weapons to Ukraine, a majority of Germans fear that continuing to supply Kiev may cause the conflict to expand to other countries. Germans are also coming up with creative ways to cope with the spike in energy prices caused by the EU sanctions against Russia, according to interviews with a Telegram channel.

On Thursday, the German parliament voted 586-100 to supply Ukraine with heavy weapons, even though Chancellor Olaf Scholz cautioned last week that the Bundeswehr stockpiles have just about run out. A recent poll showed 56% of Germans are worried this could result in the conflict expanding to other countries, while only 26% believe there is a military resolution to the Ukraine crisis.

A Telegram channel called ‘Kanzlerdaddy’ interviewed some Germans on the street to see if the Bundestag’s decision reflected the will of the people.

“I think it’s terrible. It’s a crime. German weapons have no place there,” said one elderly lady, shaking her head.

“It’s not good because we’re being dragged into a war that shouldn’t concern us. It might not be the most popular opinion, but I don’t want a war to come here,” said an older gentleman.

“I think it only prolongs the war: more suffering, more deaths, more trouble,” said another silver-haired woman. “Germany should stay away from this.”

Younger Germans seemed more in favor of the weapons shipments, however.

“I think I would support this,” said one middle-aged woman. “I think what [Russian President Vladimir] Putin does is unacceptable.”

“In some sense we should send weapons there because it’s possible we’ll be able to stop it fast – stop Putin fast and end this war fast,” said another woman. “I don’t know, but maybe it’ll make things worse?”

“It’s too late,” lamented a bespectacled young man, a mask under his chin. “Everything is happening too slow. I think it’s a disgrace. We were helped like nobody else to restore the country after World War II. And in this sense it’s sad and shocking that everything’s happening this way.”

In another “people on the street” video, ‘Kanzlerdaddy’ asked Berlin residents how they are coping with the current energy situation. Temperatures in the German capital still dip down to 5 degrees Celsius at night, but heating is a luxury for many.

“I’m always looking to save money on utilities,” said a middle-aged man. “I’m trying to use less electricity and gas at home, and not heat my apartment too much … I drive less now. Cruise-control also helps a lot. I drive slower and maintain the same speed.”

“I’m great at conserving energy at home,” said a woman. “I close the refrigerator door quickly, turn off the lights, and don’t heat my apartment too much.”

“I always try to save on heating. I prefer to put on a sweater at home instead of switching on my radiator,” another woman said. “I always switch off the lights when I leave the room. Actually, nothing really changed for me now. I’m not saving more than I used to now.”

A younger woman pointed out that the heating season is over at least, but hot water still requires electricity or gas.

“Maybe take five minutes to shower or do dishes,” she said. “One must use public transport. And no electric dryers, you need to hang clothes up.”

Germany relies on imports of Russian natural gas for much of its energy needs, and has grudgingly agreed to pay for it in rubles after EU sanctions banned euro and dollar transactions with Moscow.

Former German defense minister and current EU Commission President Ursula von der Leyen protested this week as “blackmail” Gazprom’s decision to halt exports to Poland and Bulgaria after they refused to pay in rubles, but Moscow replied that it was the EU’s own fault for taking “unprecedented hostile steps” such as “robbing” Russia’s foreign currency reserves.