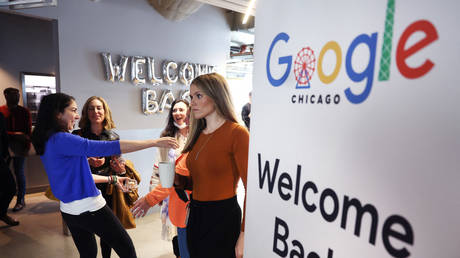 Search giant to slow hiring for the coming year, while Windows-owner has laid off workers

Google and Microsoft are cutting back on new hires as the inflation-plagued US economy threatens to tip into a full-on recession. Google CEO Sundar Pichai announced in a staff email on Tuesday that hiring would slow for the remainder of the year, while Microsoft laid workers off across multiple divisions and offices on Monday, even as the company insisted it would boost headcount over the next year.

Pichai specifically cited the threat of economic recession in his email to Google staff, as cited by the media, explaining that the company will focus on “engineering, technical and other critical roles” for the rest of the year and for 2023 in the face of an “uncertain global economic outlook.” He called on employees to “be more entrepreneurial, working with greater urgency, sharper focus, and more hunger than we’ve shown on sunnier days,” acknowledging that “in some cases, that means consolidating where investments overlap and streamlining processes.”

While Google parent company Alphabet’s sheer size and its products’ ubiquity might make it seem recession-proof, recent expansion in less-than-profitable areas such as its smartphone business, wearables, and self-driving cars may have made the 164,000-person company more vulnerable to what Pichai described as “economic headwinds.” The company also added 10,000 new employees during the second quarter, with more coming on board in the third quarter, according to the CEO.

Microsoft, meanwhile, attempted to downplay its layoffs, which affected less than 1% of the 180,000-person company, as typical for the calendar period rather than a reaction to impending economic doom. “Like all companies, we evaluate our business priorities on a regular basis, and make structural adjustments accordingly,” the company said in an emailed statement, pledging to “invest in our business and grow headcount overall in the year ahead.” However, in addition to this week’s layoffs, the company cut back on hiring in its Windows and Office groups in May.

The two megacorporations are far from the only industry giants trimming the fat in the face of gathering economic clouds. Meta, the parent company of Facebook, has cut its new hire targets by 30%, with CEO Mark Zuckerberg reportedly telling employees the social media behemoth is suffering “one of the worst downturns [it has seen] in recent history.”

Since May, rideshare company Lyft and social app Snap have announced hiring slowdowns, while Tesla is not only cutting back on new hires but offloading 10% of its salaried employees.

Inflation in the US is running at a 40-year high, with consumer sentiment correspondingly at rock bottom. The Federal Reserve has sought to rein in the runaway price growth by raising interest rates, a solution that, according to analysts, risks triggering a recession of its own as the sizable debts carried by the average American become unmanageable.