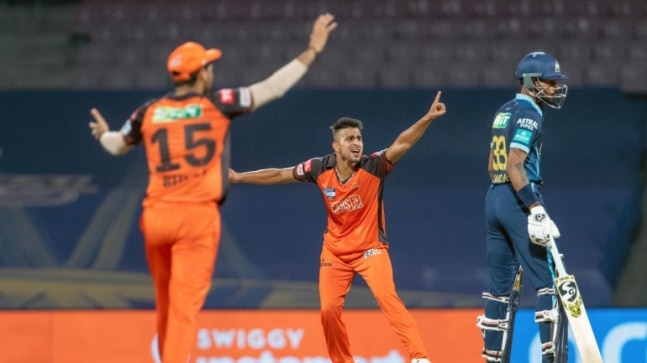 Gujarat Titans moved to No.1 on the IPL 2022 points table after a thrilling five-wicket win over Sunrisers Hyderabad at the Wankhede Stadium in Mumbai on Wednesday. Rashid Khan hit two sixes in the final over from Marco Jansen as GT chased down 196 to end SRH’s five-match winning streak this season.

Umran Malik, the SRH tearaway fast bowler, had grabbed his maiden five-wicket haul but GT won a cliffhanger despite his heroics. Wriddhiman Saha starred with 68 off 38 balls while Rahul Tewatia smashed an unbeaten 40. Rashid Khan, who went for 45 runs off his 4 overs earlier in the evening, made an unbeaten 31 including three sixes off the final over to give GT a memorable win.

After being put in to bat, Sunrisers Hyderabad lost Kane Williamson and Rahul Tripathi but Abhishek Sharma (65) and Aiden Markram (56) added 96 for the third wicket and struck superb half-centuries before Shashank Singh hammered an unbeaten 25 off 6 balls to give Sunrisers Hyderabad 195 for 6 off 20 overs.

Wriddhiman Saha and Shubman Gill were on fire for Gujarat Titans in a steep chase. Saha was in a punishing mood – up against Marco Jansen and T Natarajan and up against the best bowling attack of IPL 2022, the GT openers were on song. Saha, who was snubbed by the selectors and dropped from the Test team just a couple of months back, played some stunning shots to take the Titans off to a flying start.

It all looked good for GT until Umran Malik came into the attack. In his first over, he removed Gill and then hit Hardik Pandya on the shoulder with a thunderbolt. And in his second over, Umran dismissed Hardik to bring SRH back in the game despite an electrifying start from Wriddhiman Saha.

It was attritional cricket from both sides and at the half-way stage, GT had reached 91 for 2 with Saha and David Miller at the crease.

GT were banking on Wriddhiman Saha to keep going in pursuit of a challenging total. However, he was Umran Malik’s third victim. Another super-fast delivery from Malik cleaned up Saha who hit his first half-century for Gujarat Titans and ninth in the IPL overall. But Umran Malik’s pace was too hot to handle and Saha departed for a 38-ball 68.

Umran Malik completed his demolition job of the GT top-order in his final over when he blew away David Miller and Abhinav Manohar to record his first five-wicket haul in the IPL. Umran Malik finished with figures of 5 for 25 off his 4 overs.

Meanwhile, Rahul Tewatia threatened to make a match out of it for the Titans and with Rashid Khan for company, they posed some danger for SRH.

GT needed 22 off the final over of what was perhaps one of the best games of the season. Tewatia hit Marco Jansen for a six off the first ball while Rashid hit another six off the third ball to bring the equation down to 9 off 3 balls. Rashid made it more tense with a six off the penultimate ball and GT needed 3 off the final ball.

Rashid Khan broke SRH hearts with another six off the last ball.

Abhishek Sharma’s aggressive half-century set the tone for a competitive total for Sunrisers Hyderabad, who have banked on their superb bowling line-up so far this season. SRH have dominated opposition teams by chasing totals – before Wednesday, they had won five successive matches following defeats in their first two matches of the season.

Kane Williamson has had a poor run this IPL with the bat but he has not received as much flak as the other big guns like Rohit Sharma and Virat Kohli because he has led his team to have successive wins. On Wednesday though, SRH needed their skipper to step up against Gujarat Titans. But Mohammed Shami’s beautiful seam presentation and a fuller length disturbed Williamson’s stumps.

Mohammed Shami conceded 11 off the first over of the innings but came back beautifully in his second. He got a third over with the new ball and Rahul Tripathi hit him for a six and two fours before he was trapped LBW in the 5th over of the innings.

Aiden Markram joined Abhishek Sharma, the highest run-scorer for SRH in IPL 2022 and the two needed to build a strong partnership. The two did just that for Sunrisers Hyderabad and Abhishek raced away to his second half-century of the season. The young opener was particularly harsh on Rashid Khan who had played for SRH up until last year. In his four overs, Rashid leaked 45 runs.

Abhishek Sharma played a mature innings after the dismissal of Kane Williamson and Rahul Tripathi and with Aiden Markram gave Hyderabad a solid platform. The two added 96 for the third wicket before Abhishek fell to a slower ball from Alzarri Joseph.

Mohammed Shami came back for his last over and it was a dramatic one. He first dismissed Nicholas Pooran before Aiden Markram hit him for a six to bring up a sensational half-century.

Washington Sundar was run out by a direct hit from Joseph on his follow-through but the Sunrisers had enough in their tank to give their fearsome pace bowlers plenty to work with.

Lockie Ferguson’s final over went for 25 runs – Marco Jansen started with a six before Shashank Singh smashed three sixes off the last three balls as SRH finished with 195 for 6 off their 20 overs.