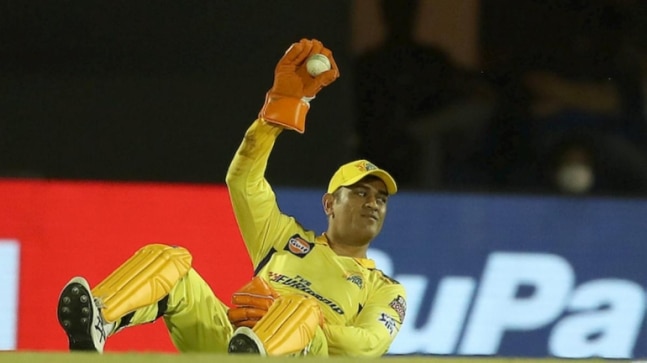 Chennai Super Kings’ core group of players have had amazing camaraderie over the years. Known for their close bond and sense of humour, players like Ravindra Jadeja, MS Dhoni, Dwayne Bravo and even till recently Suresh Raina have created moments of magic on and off the field.

Something similar came to fore in a video posted by the Chennai Super Kings when MS Dhoni, Dwayne Bravo and Ruturaj Gaikwad sat together to react to images from the field.
MS Dhoni, did not waste time to be at his hilarious best throwing a dig at Dwayne Bravo in one of the photos where is looking to explain something to Dhoni.

“Bravo is saying that my mind is not working, which is half the time,” joked MS.

Dhoni revealed in the video that in the last 10-12 years, he has not told Bravo what to bowl during crunch situations.

“more often than not I tell him to bowl whatever you want, but don’t bowl this variation,” Dhoni said.

Reacting to his own image of concentrating on the field, Dhoni joked that he looks like this when he thinks of bringing himself into bowl.

“This is when Bravo gets hit and I am thinking should I give him the gloves and start bowling because I can’t really bowl worse than that,” laughed Dhoni.

Chennai Super Kings have not been upto the mark this season, losing six out of their eight games. They lost their last match against Punjab Kings, despite a valiant knock from Ambati Rayudu, who almost got his team over the line. MS Dhoni, alongside Ravindra Jadeja could not win the game for Chennai in the last two overs due to some fantastic display of death bowling by young Arshdeep Singh who kept it ridiculously tight at the backend of the innings.

Chennai next take on SunRisers Hyderabad on Sunday, May 1 to keep their hopes alive for the top four positions.