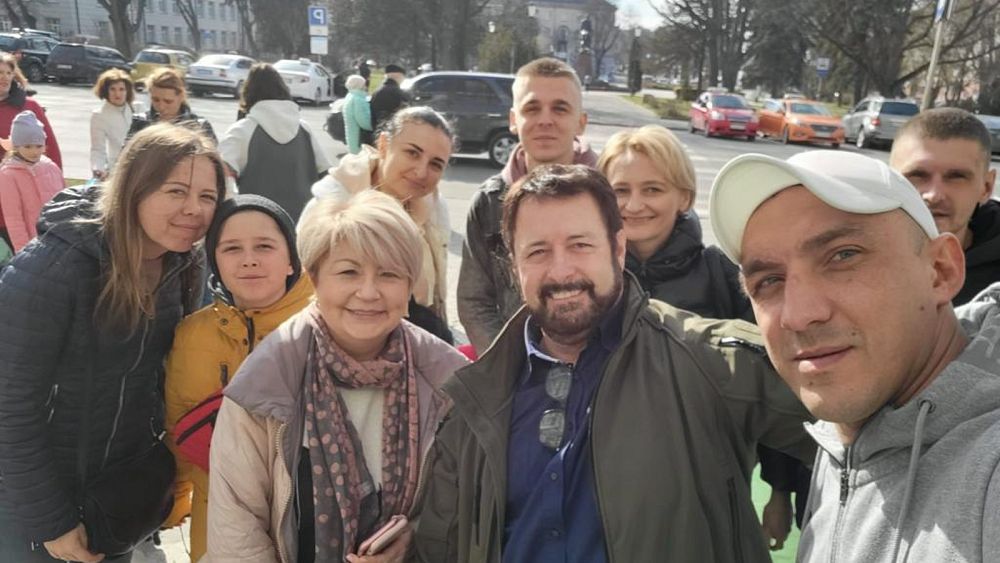 In March, Italian Alberto Andreani defied bombs and bullets to rescue 40 people from Kharkiv, Ukraine, including his wife’s family.

Twenty of those the 58-year-old rescued are still staying with him at his apartment in Vienna, Austria.

One month later, Alberto returned to the war-torn country. This time he’s hoping to save 500 people.

Having gathered a team to support him behind the scenes, he worked with the Ukrainian authorities to create a safe humanitarian corridor for the country’s most vulnerable.

This is the story of his mammoth effort.

‘I cannot forget the faces of those crying for help’

Alberto, who works for the United Nations in post-conflict zones, first went to Ukraine in March to bring his wife’s family to safety. He was almost killed during his first trip, after accidentally violating the nationwide curfew.

But Alberto was undeterred.

Describing the war as a “genocide”, he was left deeply disturbed by what he saw travelling through Ukraine. It strengthened his resolve to return and do something bigger.

Through the donations of hundreds of people, Alberto raised around €20,000 to fund a second mission. He got in touch with the mayor of Ternopil, a small city in western Ukraine, and started to plan the rescue of hundreds of women, children, elderly and disabled people, especially those without the means to escape.

“I have many thoughts,” Alberto said on the eve of his second journey. The fighting had grown more brutal since his first trip, with allegations of Russian war crimes, and he was concerned about entering a war zone.

“But I cannot forget the faces of the people I saw [in Ukraine] who were asking me for help,” he added.

‘My aide abandoned me after the bombs fell’

On 2 April, the first day after he arrived in Ternopil, a strong explosion rattled the windows of his hotel. It was a blast from a Russian missile, intercepted before it hit the city. This shattered his illusions of safety, as he thought Ternopil had been spared from Russian bombings up to that point.

Making matters worse, Alberto’s aide — a fellow Italian — deserted him. He cut all contact with Alberto and gave him no explanation. Alberto’s messages remain unanswered.

He worked tirelessly with a motley crew of Ukrainian evangelical Christians and far-right nationalists to locate those in need of evacuation, visiting shelters, filling out paperwork and liaising with officials.

Alberto felt a constant and underlying sense of fear, throughout this time, he said.

“When you go to a town hall, you know you’re in an institutional building which could easily be targeted by missiles,” he said. “The big question is always: ‘Will we be next?’”

Alberto was also forced to set aside his political differences with Ternopil’s mayor Serhiy Nadal, who belongs to the ultra-nationalist Svoboda party, and eventually came to praise his efforts to help the city’s refugees.

“In situations like these, politics doesn’t matter,” he said. “Regardless of [Nadal’s] views, he’s doing his best to help people in need.”

This feeling was reciprocated.

“We are very grateful for what Alberto has done,” said town hall employee Natalia. “The families have been selected by [us] very carefully, and those that Alberto has saved are happy now.”

By 10 April, after more than a week in Ternopil, Alberto’s mission was complete. He boarded his bus, loaded with around 50 refugees, and drove to the Polish border, safely reaching Vienna.

Many of those on board were families in challenging situations: mothers with severe psychological difficulties, individuals with epilepsy and the elderly.

“Mothers told me that they saw their door broken down by Russians, in order to destroy towns. And worse,” he said.

‘My children will never forget the sound of bombs’

Among the hundreds of people Alberto and his team rescued are Yulia, 42, and her two sons, aged eight and 11, from the Ukrainian capital, Kyiv.

They have now found refuge in San Carlo Canavese, a small town near the Italian city of Turin, where many of the refugees Alberto helped evacuate are currently staying.

“My sons are happy,” said Yulia, who described their new life as a far cry from the dread and terror back home. “They have lessons with their Ukrainian school online, they play soccer outside, we have green space.”

But Yulia still remembers the scars of conflict.

“Back in Ukraine, we had many sleepless nights. We can sleep now,” Yulia stated. “But my children told me they will never forget the sound of bombs falling near our home.”

She vividly remembers the day Russia invaded Ukraine, and her world was thrown into disarray.

“On 24 February, I was staying with my grandmother and kids in Kyiv,” she said. “That day, I heard bombs, loud sounds.

“I couldn’t believe it was happening.”

The family stayed put in Kyiv, but after missiles hit a barracks near their house, they decided to head west to Ternopil, from where they eventually left the country.

“While in Ternopil, my dream was to be back in my house for Easter,” she said. “But my husband, who stayed around Kyiv, told me it was too dangerous, that missiles could come at any minute.”

When Yulia fled with her sons to Italy with Alberto, she had to leave her husband behind.

“Both my children were crying when their father left,” Yulia says. “Like other Ukrainian men aged 18-60, Yegor has had to stay in the country and is currently fighting the war.

“I told them: you should be proud of your father. If he doesn’t stay, then who will defend our home?”

Since then, Yulia has only managed to speak to Yegor sporadically. “The last time he called me, it was actually to ask if he should come home to water the flowers,” she laughed.

“My grandmother was six when Hitler bombed Kyiv,” Yulia said. “She isn’t afraid anymore. She’s good, our two cats have stayed with her.”

“I have a close friend in Mariupol,” Yulia added. “The whole city lives underground, like in a film. So many people have died. What’s happening back in Ukraine isn’t just a war, it’s a genocide.”

While reminiscing over the past few weeks and mulling over the future, Yulia is keen to express her gratitude to Alberto, whom she credits for bringing her and her two sons to safety.

“Alberto has been of great support to us all,” she stated. “He told us everything would have gone well and that he would have taken care of us to the very end. All Ukrainians are infinitely grateful to him.”

‘None of the Italian authorities have responded to us’

Elisabetta Capannelli is one of Alberto’s team, working in his office in Vienna.

A professor at Bologna University and a former World Bank Country Manager for Romania and Hungary, Elisabetta heard about the mission through word of mouth after Alberto’s first journey in March.

Since then, she has been coordinating the project, conducting a variety of tasks that range from research to speaking with administrators and following individual cases.

“My life has been flipped upside down since joining this effort,” she told Euronews. “I can afford it, but I gave up all my plans.

“The people who networked, who heard about [Alberto’s mission] and are now working for it, have come for their desire to help this project,” she added. “This whole thing has become something bigger than what he intended with his good, generous heart.”

Since Alberto’s first journey, his aim has indeed metamorphosed into something far greater than what he’d set out to do – namely, he has worked to establish a safe and sustainable humanitarian corridor between Ternopil, Austria and Italy, that can assist Ukrainian refugees without support networks or relatives abroad.

While he took approximately 50 people out of Ukraine on his bus, other evacuations are proceeding in weekly batches. Alberto and Elisabetta have reported that more than 100 people have currently been saved, and that that the team is working to reach its 500-refugee target.

But despite the massive level of teamwork behind Alberto’s mission, there’s one thing that he’s still missing: the support of Italian authorities.

A letter co-signed by Alberto and the mayor of Ternopil on 28 March asked for help from a variety of Italian regional authorities – namely the regional presidents of Piedmont, Tuscany, Emilia-Romagna, and Liguria, and the mayors of Turin, Ivrea, Florence, Bologna and Genoa – in helping to evacuate and settle refugees. More than a month later, none of them has replied.

It means Alberto’s project has to provide for itself and rely on independent organisations, such as La Memoria Viva association, to help allocate and assist refugees in their resettlement.

“We have refugees everywhere. In Piedmont and Abruzzo in Italy, in Krakow and Warsaw in Poland,” Elisabetta stated. “We’ve received assistance, but we don’t know how long things in Ukraine will go on for and providing for fragile people can pose many problems. We simply haven’t received enough support.”

While Alberto is visibly pleased with the results he has received so far, he can’t contain the frustration he has felt from the lack of support received from the institutions whose help he was counting upon.

“The purpose of this project isn’t to enter into competition with existing evacuation channels, but rather to create a sustainable corridor for those who are vulnerable,” he concluded. “The Italian authorities just haven’t understood this.”