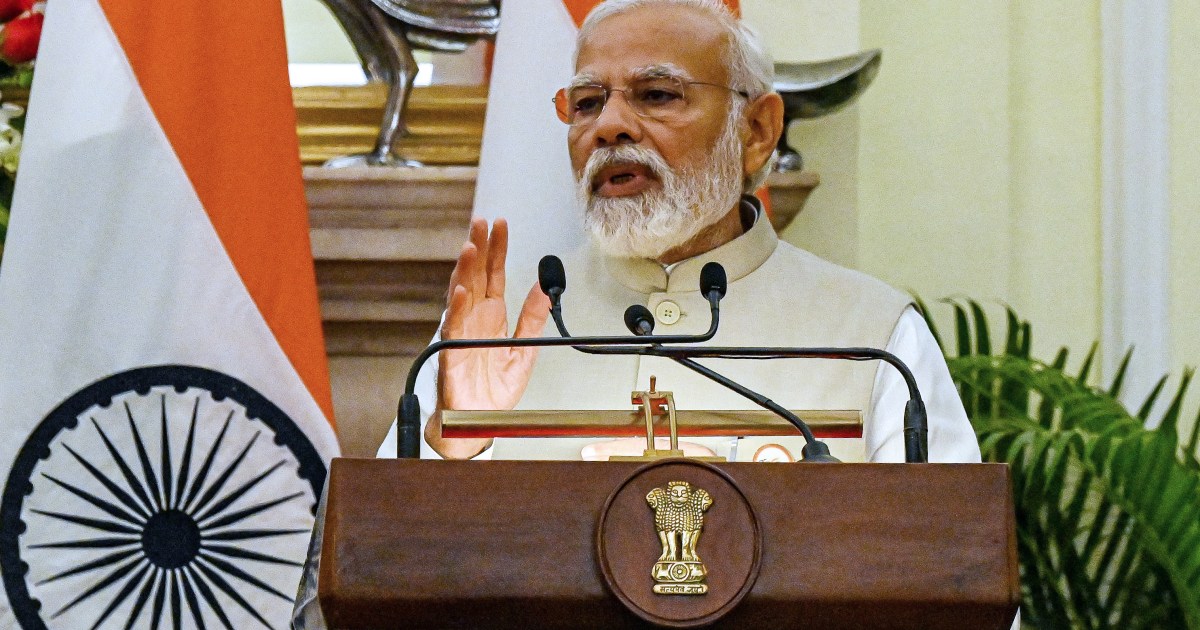 In his address at Palli village in Samba district in the southern city of Jammu, Modi said: “It’s a proud moment that democracy has reached the grassroots level in Jammu and Kashmir,” adding that more than 30,000 representatives are now running the village system on their own.

But analysts and opposition leaders say the disputed region is without an elected government since 2018 before the region’s special status was revoked by the Hindu nationalist government.

Elections for district and village councils were held in 2020 but critics say the local bodies have no power to legislate or amend laws in the region now directly run from New Delhi.

Security has been tightened across the region with hundreds of additional troops deployed on the roads and highways. The trip comes as the region has been rattled with multiple gun battles over the last three days killing nine suspected rebels and a police official.

The attacks on migrant workers and local Hindus have also spiked in recent weeks by suspected rebels.

One of the gunfights took place in the Sunjwan area on Friday in the southern city of Jammu, 34km (21 miles) from Samba district where Prime Minister Modi held his address.

The government led by Modi’s Bharatiya Janata Party (BJP) has maintained a tight grip on the situation and introduced controversial laws and policies that locals fear are aimed at bringing demographic change in the Muslim-majority region.

In the last two years, hundreds of people including journalists and rights activists have been jailed under laws that allow detention without charge for up to two years.

The ruling BJP government says the 2019 removal of Article 370, which granted a special status to the region, was aimed at bringing development to the region and led to an end of armed rebellion.

But the violence has failed to decline. This month alone 29 people including 22 suspected rebels, five security personnel, and two civilians were killed across the region.

The BJP has been accused of running an anti-Muslim agenda, with many provincial governments led by the BJP passing laws that infringe on the basic rights and freedoms of minorities. Rights groups have accused the government of running policies and actions that target minorities. The BJP has denied the charges.

Modi said that the proposed investments in the last two years have reached $5bn (Rs 38,000 crores) in the region. It includes proposed investments by the United Arab Emirates-based (UAE) companies such as retail giant LuLu Group and DP World. UAE’s Emaar group has announced that it will develop a 5000-sq-ft shopping mall in the region’s main city Srinagar, the UAE-based Khaleej Times reported.

The UAE, which has cultivated a strategic relationship with India, conferred its top civilian honour on Modi in 2019, days after New Delhi launched a clampdown on the Muslim-majority Kashmir region.

“A little over a decade ago the Srinagar-Sharjah sector flight was made to fail as Pakistan invoked Kashmir’s ‘disputed’ status with UAE. A decade later the UAE is flying down to invest in Kashmir,” Zafar Choudhary, a political analyst and journalist based in Jammu, told Al Jazeera.

“These are not just the private parties but state-led consortiums of UAE. So, these are not just investment proposals but an endorsement of India’s position on Kashmir, and evident rejection of Pakistan’s stand,” he said.

India and Pakistan both claim the divided territory of Kashmir in its entirety, but rule over parts of it.

In a statement, the Prime Minister’s Office (PMO) said that “since the introduction of constitutional reforms the government has been focused on bringing about wide-ranging reforms to substantially improve governance and enhance ease of living for the people of the region at an unprecedented pace.”

The Indian prime minister also virtually inaugurated the Banihal-Qazigund road tunnel, a major four-lane tunnel that will provide all-weather connectivity between Kashmir and the rest of India. He will also lay the foundation stones for two hydroelectric projects.

Modi’s last visit to the region was in November 2021 to celebrate Diwali with the Indian armed forces in the Nowshera district of Jammu.