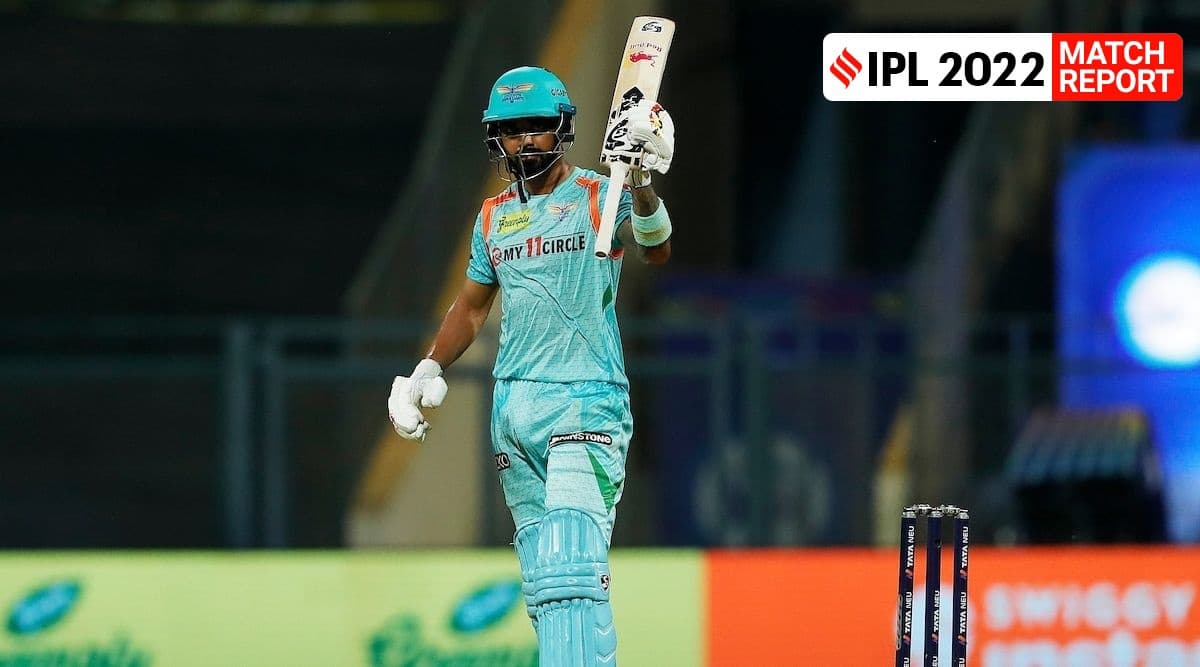 KL Rahul hit his second century of the season against Mumbai Indians even as almost every other batsman struggled on a difficult Wankhede Stadium pitch. Rahul dragged Lucknow Super Giants to 168, and Mumbai Indians could not even come close in their first match at their home ground in three years as they went down by 36 runs.

In both his previous games this season at the Wankhede, Rahul had gone first ball to seriously good deliveries from Mohammed Shami (against Gujarat Titans) and Trent Boult (against Rajasthan Royals). And in both those games, LSG went three down by the fourth over.

On Sunday night, their primary aim early on seemed to be not to lose too many wickets in the Powerplay. The pitches at the Wankhede have been tricky to predict; in his pitch report before the game, Matthew Hayden said, “I’m a little confused with this surface. Every time it looks wonderful with a nice covering of grass, but the scores have been up and down.”

This time, the ball would hold up big time; it was hard to hit through the line, even the straight shots were proving difficult to line up. MI read their home conditions quickly, and kept denying LSG pace.

Not that Rahul and Manish Pandey tried to force it too much. The Powerplay score was 32 for the loss of Quinton de Kock to a full toss from Jasprit Bumrah. It was as if LSG were set on giving the Test-match cliched first hour to the bowlers. After de Kock was dropped at deep square-leg and parried over the rope instead in the fourth over, LSG went five overs without hitting a boundary. Almost nine overs in, they had yet to reach 50, and Rahul was on 29 off 30.

Leading from the front, Captain @klrahul11 is adjudged the Player of the Match for his outstanding knock of 103*#TATAIPL #LSGvMI pic.twitter.com/gmDFYXl0bb

Off his next 32, though, Rahul would take 74. He broke the shackles by heaving Jaydev Unadkat over the shorter deep-midwicket boundary. MI had been digging it in short of a length, with fine leg and third man up, and deep fielders protecting the square boundaries. But Rahul had found a way out by now. With almost nothing to work with, he’d wait and place his pull or cut wide of the boundary riders.

MI tried making him work harder; they placed two midwickets to force Rahul to play straight and miss out on runs. He’d score just 15 of his runs in the straight ‘V’; most came square of the wicket.

Rahul has a good record against Bumrah, and showed why. He welcomed the star pacer back into the attack on the first ball of the 17th over by slicing a slower wide yorker for four to the left of deep point. The calm manner in which he played that shot, Rahul seemed to have read what Bumrah was going to bowl. And he easily beat the deep fielder to the longer boundary.

The field changed immediately; to deep point was added a square third man and short third man was moved finer. The last ball of the over arrived as a low full toss on off; Rahul went to the right of deep point this time, creaming it to the cover rope.

Bumrah would come back with a four-run 19th over, getting his yorkers on target, but Rahul brought up a 62-ball hundred at the start of the 20th, as he heaved Riley Meredith 83 metres over the longer deep-midwicket boundary.

He loves batting against MI, and loves batting at the Wankhede; at no other ground in the country has he scored more runs in the IPL – 502 at an average of 62.75 and a strike rate of 149.

The story was different at the other end, though. Rahul remained off strike for the latter half of the last over, and LSG ended on 168 for 6 with three dots; their other batsmen managed 57 off 58.

Rohit Sharma was animated in the field and came out for the chase all charged up. Pulling and charging the seamers, he moved to 31 off 19 by the end of the Powerplay, which brought 43. However, Ishan Kishan endured another horror knock, scraping 8 off 20; Rohit slowed down massively, and top-edged a swipe off Krunal Pandya to short third man to depart for 39 off 31.

There was definitely some dew as the LSG fielders would wipe the ball now and then, but they still hit their hard lengths and bowled their slower ones well enough to have MI crawling to 67 for 4 by the 12th over.

From there on, it needed a minor miracle, and neither the promising spark of Tilak Varma nor the fading threat of Kieron Pollard was able to make a difference.

LSG had to bowl one over of spin from either Ravi Bishnoi or Krunal at the death but Rahul delayed it till the very end, and his pacers had the game well in the bag by then, with 39 required off the 20th.