Italy election: Who is Giorgia Meloni? Is Berlusconi still relevant? What issues matter to voters? 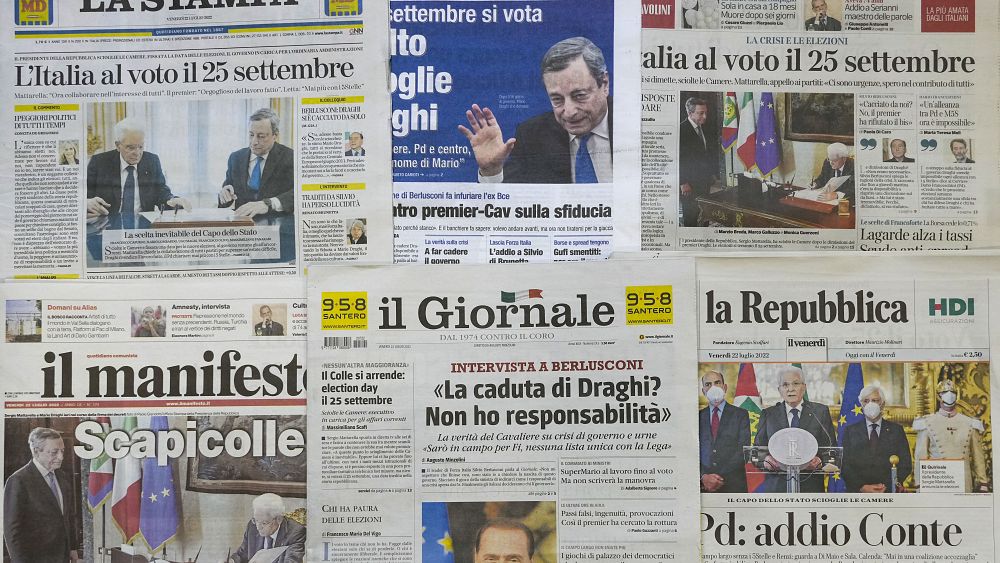 Italians will vote in a snap election on Sunday.

A right-wing coalition — which is headed by Giorgia Meloni’s far-right Brothers of Italy party — leads opinion polls, followed by a centre-left bloc and the populist Five Star Movement.

For its audio guide on the election, Euronews brought together three journalists to explain the vote and the issues at stake.

You can listen in the video player, above.

Award-winning documentary maker Annalisa Pira could not join us due to technical problems. She has given her thoughts in the article, below.

The discussion started with a question on why Italy’s outgoing prime minister, Mario Draghi, resigned in July, thus triggering an early set of elections.

Draghi had been acclaimed by analysts for his role in Italy’s post-COVID recovery and was part of the reason for Italy’s selection as The Economist’s “Country of the Year” in 2021.

Orlandi responded by highlighting the inherent fragility of his coalition government, which brought together parties from the left and right.

“The whole operation of putting together a varied coalition… was a very risky operation.”

“Mario Draghi tried his best to keep the coalition together,” she added, but ultimately remarked on how “political infighting” brought him down.

The Five Star Movement, succeeded by right-wing parties Go Italy and the Northern League, were responsible for his downfall after disagreements on an economic aid decree.

On the question of whether Italians will turn up to the polls in big numbers on Sunday — much like in Sweden’s general election earlier this month — Carlo noted the overall sense of fatigue Italians are feeling, with approximately 40% of the electorate not planning to vote.

“Having a summertime election in Italy is extremely unusual,” he said, adding that August is typically a holiday month for Italians.

“The centre-left is hoping it can rally young voters… [but the] overall feeling Italians have is ‘here we go again’”.

This marks Italy’s 67th government since the end of World War II.

Meloni: the ‘Janus of Italian politics’?

The discussion naturally came onto Giorgia Meloni, Italy’s far-right, breakout political star – but not a debutant, as Carlo noted.

Meloni’s party, Brothers of Italy, scraped 4% at the 2018 election, but it has emerged as the country’s biggest force.

If opinion polls prove correct, Meloni could end up as the country’s first female prime minister.

“People should be aware of the political baggage that Giorgia Meloni carries,” Carlo stated. “She comes from a long tradition that ultimately has its roots in neo-fascism.”

“She’s the Janus of Italian politics,” he added, using the metaphor of the two-headed Roman deity to describe her political dualism – on the one hand, there’s the more moderately conservative Meloni of TV debates, and on the other, the hardline, nationalist politician who attends far-right rallies.

“She’s really managed to carve herself a space in Italian politics, by also being part of the opposition.”

Orlandi added that — despite Meloni’s fascist background — she has managed to transcend her roots and appeal to a transversal range of voters.

“[Meloni is] trying to present herself as more conservative than eurosceptic… as a more moderate type of leader,” she claimed.

Meloni’s fascist roots are the “elephant in the room”, in Orlandi’s words. “The leader of the Democratic Party hasn’t quite used this issue as a way to confront Giorgia Meloni.”

Among her supporters are people who were against the Green Pass — Italy’s COVID-19 certificate — and those who oppose Brussels.

“She’s straddling a very fine line,” Carlo noted, between being a “credible” figure and a “disruptive force”.

In comments that were provided after the discussion, Piras noted the inherent contradictions in Meloni as a political figure.

“Brothers of Italy is the heir of the Fascist Party and is therefore very conservative in its views, [but] it is led by a young charismatic woman and is called Brothers of Italy, not Sisters,” she asserted.

“It [appeals] to Italy’s traditional patriarchal society, family and Catholicism, even though the leader herself is not married.”

On the subject of disruptive forces, the discussion turned to a controversial well-known candidate: Silvio Berlusconi.

The former prime minister and media tycoon, whose career has been riddled with scandals and a tax evasion conviction, is running with Meloni in a right-wing bloc, although Berlusconi’s party is only pulling in a 7-9% vote share in opinion polls.

So does he still possess a mass appeal?

“Berlusconi has to be seen more as an element that is useful, that is going to be part of [the centre-right] coalition,” she stated. “[But his] influence isn’t as great as it used to be.”

“People are now having a laugh rather than taking him seriously… his age is definitely passed,” she added.

Carlo agreed, but felt that the possible influence he can exert behind the scenes ought not to be underestimated.

“He could really tip the scales… the centre-right needs his support to stay in place.”

‘90% of Italians worry about energy bills’

There are many major themes occupying the election debates in Italy. But as the war rages in Ukraine and energy bills soar, Italians are particularly worried about the repercussions of the cost-of-living crisis.

“It’s a major issue in this election… [polls suggest] 90% of Italians are deeply concerned about this,” said Carlo.

Energy bills are likely to double or even triple.

He went on to outline some of the broad policies the centre-right and left have, including the former’s support for decoupling gas and electricity prices and a push for nuclear energy.

With regard to the war in Ukraine, Orlandi outlined the question of relations with Moscow, especially given Salvini and Berlusconi’s longstanding affinity for Russian President Vladimir Putin and a recent US report on links between European parties and the Kremlin, which did not specifically list Italian political figures.

“[Salvini] has changed [his] mind about Putin… to distance himself from his past stance on the matter,” she claimed. But as a result of recent controversies, the “issue is being monitored very closely”.

The left, in general, has tended to warn, Orlandi said, that “having right-wing politicians in the majority and ruling the country could mean being closer to Moscow”.

But Ukraine and the war are not the only major issues at stake. Another is Italy’s €190 billion post-COVID-19 Recovery and Resilience Plan, which caused controversy among Italy’s parties and especially Giorgia Meloni’s bloc.

One of the controversial reforms? Opening concessions for beach lidos.

“It might seem like something trivial… but in Italy, beach lidos are a big business,” Carlo stated.

Brothers of Italy’s opposition to this reform has made it, in his words, “part of the reason why they are seen as the party that is standing up for small businesses, family-run businesses especially”.

So who will win and how will that impact Italy’s reputation?

The discussion concluded by addressing the crux of the matter: who will win and what impact will that have on Italy?

“It really seems the right-wing coalition is be heading towards a clear majority both in the Senate and in the lower house,” Orlandi said, while noting that “surprises could [still] be around the corner”.

As for possible repercussions for Italy and its reputation if Meloni were elected?

“It depends on what kind of policies and programme Meloni as prime minister would want to follow,” Carlo concluded. “It could make Italy seem more isolationist.”

“It’s just hard to say what kind of Meloni we will see in office, if she gets elected.”