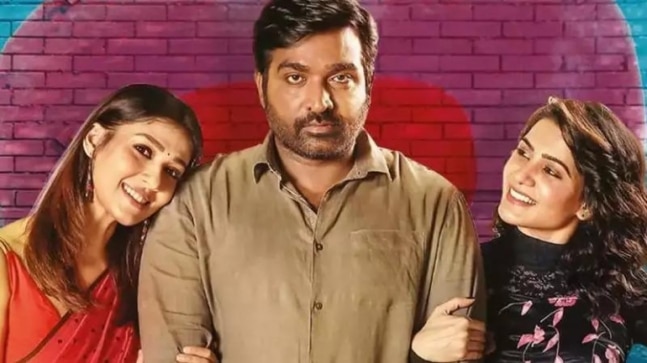 Director Vignesh Shivan’s Kaathuvaakula Rendu Kaadhal aims to be a romantic comedy with a fun concept at its core. It is about Rambo (played by Vijay Sethupathi), who is made to think that he is the unluckiest person in this world. And he feels lucky when he falls in love with two women, Kanmani Ganguly (played by Nayanthara) and Khatija (played by Samantha), at the same time. Basically, he’s two-timing, but he has a ‘reason’ for it.

If you ask, what’s the fun concept here, then you’re right. There is not. This is a morally flawed concept that has translated into ‘iconic’ films in the last few decades. Kaathuvaakula Rendu Kaadhal is no different from several love triangle films that came out in the past.

Vignesh Shivan is known for building quirky worlds in his films. In Kaathuvaakula Rendu Kaadhal, we see a family full of single people because the village thinks that those who get married into the family will die. Vijay Sethupathi’s Rambo also belongs to the same family. His father dies on the day Rambo is born. And the entire village thinks it is because of him. His mother suffers from a stroke and is bedridden. Rambo thinks that his mother will not recuperate if he’s with her and runs away from his home. Years later, he is a cab driver and when he meets Kanmani and Khatija, he falls in love with both of them.

Rambo says that he loves them equally and whenever he’s forced to choose one among them, he falters. So sweet, isn’t it? But, it really isn’t. Kaathuvaakula Rendu Kaadhal is no different from all Selvaraghavan’s films where the heroine needs to babysit the hero and heal him. In this film, not one, but two women babysit a manchild.

Kaathuvaakula Rendu Kaadhal has several morally flawed concepts which get cringe-y as you delve deep into them. It is also like a bunch of WhatsApp forwards put together. You get to see platonic love between the trio, a character explaining what ‘jinx’ means and random social messages about mentally-challenged people. But, everything is stitched together only to make Rambo think he’s lucky in this world.

Vijay Sethupathi, Samantha and Nayanthara have delivered strong performances and it is them who are holding the ship from sinking. The comedy sequences work well and the three actors were a complete hoot. It was Redin Kingsley who stole the show in Kaathuvaakula Rendu Kaadhal. Watch out for a scene in the second half where he tries to convince a woman to come out of her house.

Another major advantage of Kaathuvaakula Rendu Kaadhal is Anirudh Ravichander’s music. The superhit songs and the background music make the whole film enjoyable.

Kaathuvaakula Rendu Kaadhal has Vignesh Shivan written all over it. The staging, comedy and flawed concepts creep in when you least expect it. The director is also self-aware. In a scene, a sidekick tells Vijay Sethupathi that he’s doing a shameful job by chasing two women at the same time. And we agree. It is inconsistent in its treatment. While there’s so much hype about Rambo’s mother’s character, it turns funny the next minute, making it difficult to process the feelings.

Kaathuvaakula Rendu Kaadhal deals with platonic love, but the route it takes is extremely problematic. The main grouse of the film is that it never takes itself seriously.

2.5 out of 5 stars for Kaathuvaakula Rendu Kaadhal.