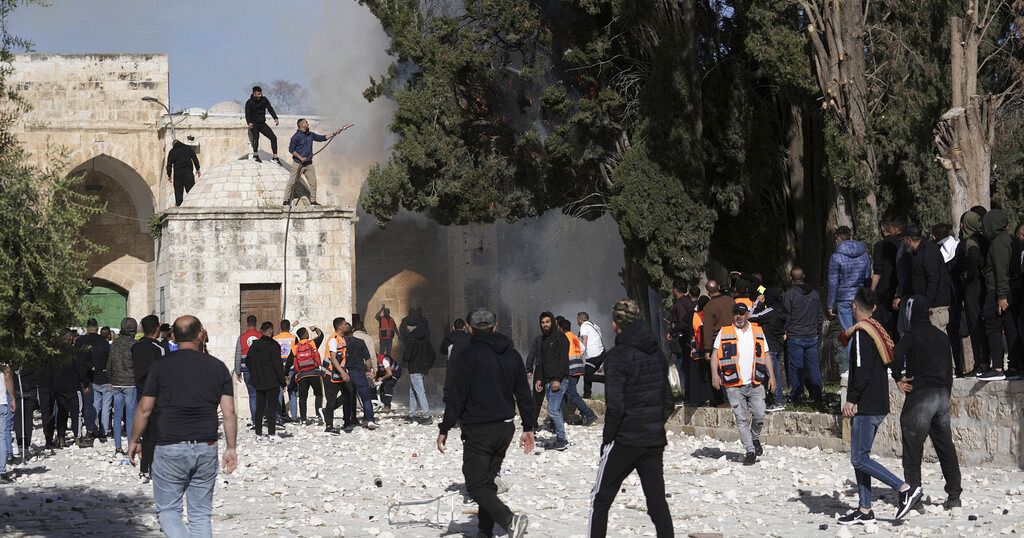 The leaders of Egypt, Jordan and the United Arab Emirates have met in Cairo to discuss the tensions in Jerusalem.

A statement after the talks said Egyptian President Abdel Fattah el- Sissi, King Abdullah II of Jordan, and Crown Prince of Abu Dhabi Sheikh Mohammed bin Zayed Al Nahyan, the de facto leader of the United Arab Emirates had called for calm in Jerusalem and for Israel to respect the status quo of Al- Aqsa mosque.

They also urged Israel to “stop all measures that undermine the two-state solution,” and to find a way to return to serious negotiations with the Palestinians.

The Temple Mount, known as Haram al-Sharif or referred to as the Al-Aqsa compound is a holy site for both Muslims and Jews and is governed through a tenuous power-sharing agreement.

It has been a perennial flashpoint for violence and over the past week more than 200 people, mostly Palestinians, have been wounded in clashes there.

Palestinians have been outraged by a massive Israeli police deployment and repeated visits by Jews to the holy site.

But he has pledged to reduce tensions by taking steps to improve living conditions in the West Bank and Gaza.

The meeting comes after U.N. Secretary-General Antonio Guterres discussed the tensions in separate calls on Saturday with the Israeli prime minister and Palestinian president.

In statements released after both calls, the U.N. said Guterres discussed “efforts to lower tensions, end provocations and unilateral steps, and restore calm.”

Guterres “reiterated that the status quo at the Holy Sites must be upheld and respected,” both statements read.

The clashes at Al-Aqsa come amid a wave of deadly violence, which has sparked fears of a wider conflict.

Rocket launches from the Gaza Strip on Wednesday 20 and Thursday 21 prompted retaliatory strikes from Israel.

But after similar attacks from Gaza on Friday night and Saturday morning, Israel decided not to launch counterattacks, instead saying it would close its only border to the enclave Sunday.