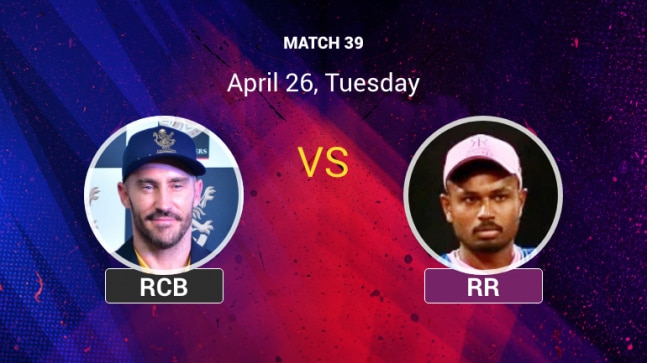 19:19 IST: Mike Hesson is down for a chat. He says that they moved quickly from the previous games, it’s one of those games where they don’t analyze much and just move on. Mentions that he is pretty pleased with their overall performances and they have had highs and lows so far, but it’s about being more consistent. Mentions that when they have discussions they do not discuss the forms of players and Virat has plenty of experiences and a good game is just around the corner for him.

19:10 IST: Sanju Samson, the skipper of Rajasthan, says they would’ve liked to bowl first as looking at the conditions but they are happy to bat first and hope to do the job. Says Buttler is helping the team and youngsters and he has been incredible so far. Informs there are two changes. Mentions their aim is to put the best foot forward and he feels they have done a good job so far.

19:18 IST: Faf du Plessis, the skipper of Bangalore, says that they are going to bowl first, they are looking to exploit it. Mentions that this is a competition of many games, it does not matter whether they win by many runs or lose by many runs, they should just have to get to the play-off. Adds that they have one change Rajat Patidar comes in for Anuj Rawat which means Virat Kohli will open the innings. Concludes by saying that it’s a new day and a new game and they want to do well.

19:04 IST: TOSS – Bangalore have won the toss and they have elected to BOWL first!

19:00 IST: PITCH REPORT – Deep Dasgupta is down near the pitch. He says that this is the pitch that was used where Kolkata had chased down 160 when Pat Cummins played that blinder of an innings. Adds that it looks quite green and seamers might get help, but it’s abrasive under the grass which means that it could grip and it’s a two-paced wicket. Traditionally it’s been a chasing ground.

18:38 IST: Honestly, Rajasthan have been the most prolific team around this season, with the top scorer, Jos Buttler, and the highest wicket-taker, Yuzvendra Chahal in them. They do look like a solid team and will fancy a win here against Bangalore who were demolished by Hyderabad in their last match. They will be itching to bounce back with a solid performance and will hope that Virat Kohli breaks the shackles and find some form. If you look at the last few battles between these two, it is Bangalore who dominates the chart. This one promises to be an exciting match. Stay tuned for the toss and other updates.

18:36 IST: Hello and a warm welcome to the coverage of match number 39 where Bangalore will meet Rajasthan. The last time these two met earlier, it was the team from South who won the clash. Will they do the double or Rajasthan will take the revenge? We will find out.