Malians rally after army calls for protests over ECOWAS sanctions 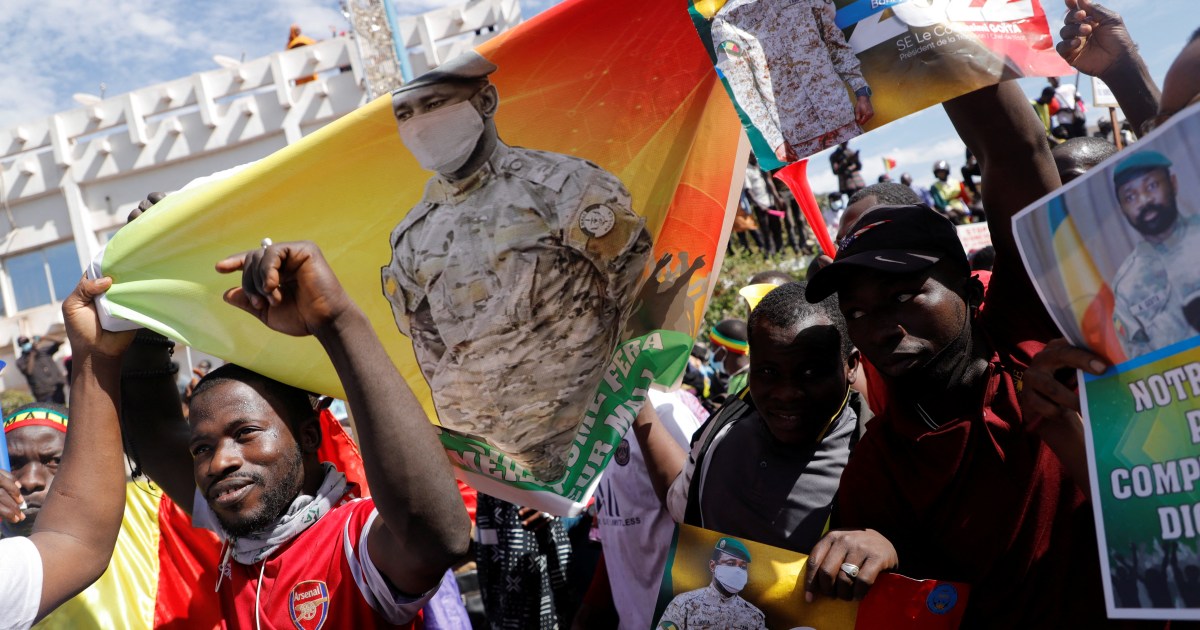 Malians have taken to the streets en masse after the country’s ruling military called for protests against stringent sanctions imposed by the Economic Community of West Africa States (ECOWAS) over delayed elections.

Thousands of people wearing the national colours of red, yellow and green gathered in a central square in Mali’s capital on Friday for a rally staged by the military government.

People poured into Independence Square in Bamako holding up signs that read, “Down with ECOWAS” and “Down with France”, and singing patriotic songs.

People had gathered as an “act of defiance to the sanctions”, as well as in “a show of support to the leadership of Mali”, Haque said.

Leaders from the 15-member ECOWAS bloc agreed to sanction Mali last week, imposing a trade embargo and shutting its members’ land and air borders with the country.

The move, which was later backed by the United States, the European Union and former colonial power France, followed a proposal by Mali’s army to hold elections in December 2025 instead of in February as originally agreed.

The military cast the sanctions as “extreme” and “inhumane” and called for demonstrations.

Strongman Colonel Assimi Goita, who first took power in a coup in August 2020, has also urged Malians to “defend our homeland”.

On Friday, his office said the interim government had developed a “response plan” to the potentially crippling sanctions, without specifying details. It added that the government remained open to dialogue with regional institutions and did not intend to engage in “arm-wrestling”.

According to Haque, in the last couple of days since sanctions were imposed, the price of basic necessities such as rice has gone up.

“It’s going to become increasingly difficult for the government to pay civil servants and soldiers on the front line if it cannot access its own funds from the regional central bank,” he said.

Senior government figures attended the Bamako rally on Friday and were applauded by the crowd.

Nouhoum Sarr, a member of Mali’s transitional legislature, said “our country will be saved and liberated by the Malian army and the entire Malian people”.

“Long live Assimi,” said Abdoulaye Yanoga, a 27-year-old unemployed man at the rally, referring to Mali’s leader. “These sanctions will not succeed here.”

As well as closing borders and imposing a trade embargo, ECOWAS leaders also halted financial aid to Mali and froze the country’s assets at the Central Bank of West African States.

The sanctions threaten to damage an already vulnerable economy in one of the world’s poorest countries. A brutal armed rebellion has raged in Mali since 2012, with swaths of the vast country’s territory lying outside of government control.

Mali is already beginning to feel the effects of the sanctions, as several airlines, including Air France, have suspended flights to Bamako.

The nation is also at risk of cash shortages. Kako Nubukpo, a commissioner at the West African Economic and Monetary Union, said that it is “cut off from the rest of the world”.

France, Mali’s former colonial power, which also holds the EU’s rotating presidency, and the US have both stated their support for the ECOWAS sanctions.

EU foreign policy chief Josep Borrel said on Thursday that Brussels would follow ECOWAS in taking action against Mali over the delayed elections.

The same day, United Nations Secretary-General Antonio Guterres said it is “absolutely essential that the government of Mali present an acceptable election timetable“.

Despite the pressure, many in Mali have rallied behind the military, with nationalist messages flooding social media.

Mali’s relations with its neighbours and partners have steadily deteriorated since the coup led by Goita in August 2020 against President Ibrahim Boubacar Keita. Under threat of sanctions following that putsch, Goita had promised to hold presidential and legislative elections, and to restore civilian rule, by February 2022.

But he staged a de facto second coup in May 2021, forcing out an interim civilian government and disrupting the timetable for the restoration of democracy. Goita also declared himself interim president.

His government has argued that rampant insecurity in Mali prevents it from organising safe elections by the end of February.

France has thousands of troops in Mali and neighbouring Sahel countries in West Africa fighting armed groups. “We’re in Mali and we’re staying, but not under any conditions,” Le Drian said.