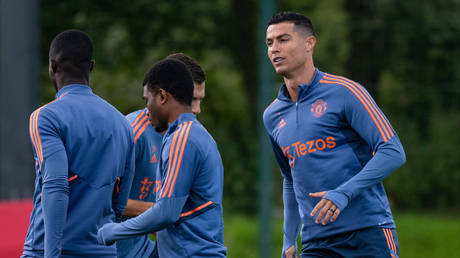 New Manchester United manager Erik ten Hag has demanded that the media does its “research” while defending Cristiano Ronaldo, and pointed out that he wasn’t the only player to leave a friendly against Rayo Vallecano early last weekend.

Ronaldo has been trying to engineer a move away from Old Trafford in search of Champions League football and told the club to listen to reasonable offers for him which have thus far not come in.

Citing family reasons, he then failed to report for preseason duty and a tour of Thailand and Australia, which meant Sunday’s 1-1 draw against the Spaniards was his maiden appearance under Ten Hag.

For an underwhelming first half where he showed clear signs of lacking match fitness, Ronaldo was brought off at the interval and was then seen leaving the ground early.

Widely criticized by fans and the media, Ronaldo was defended by his manager on Friday ahead of United’s Premier League season opener against Brighton on Sunday, with the Dutchman taking umbrage to being asked specifically about the 37-year-old.

“What do you mean? Now I have to point [out] those who left. There were many players who left, but the spotlight is on Cristiano.

“That is not right, so do your research and make out [clear that] many players left, that was what was said [by him],” Ten Hag balked.

“I don’t understand what is the relation [singling him out] – he was part of it. There were a lot of players.

“I think we’ve said enough on it. I said it’s not correct,” Ten Hag then responded, when asked why Ronaldo and the others thought they could leave.

🗣️ "The spotlight is on Cristiano and that's not right…do your research."

Things get tense between Manchester United boss Erik ten Hag and a reporter in his press conference…😬🔴 #MUFC pic.twitter.com/TSG8bILi8p

Despite Ronaldo’s conduct and his wishes to leave, Ten Hag insisted that he is “really happy” with his number ‘7’.

“I told you before,” he reminded the press. “We have a top striker, [I’m] really happy he’s here with the squad and we stick to the plan.”

Having said this, Ten Hag would not commit to confirming whether Ronaldo will feature at the weekend.

“We will see Sunday,” he stressed. “I’m satisfied with the whole team, we’re working good [with a] good culture and Cristiano is working really tough and hard.”

Given a lack of suitors after reportedly being rejected by the likes of Chelsea, Atletico Madrid, Bayern Munich and Paris Saint-Germain, Ronaldo looks like having to honor the two-year deal he signed last summer when rejoining United for the second time in his career from Juventus.