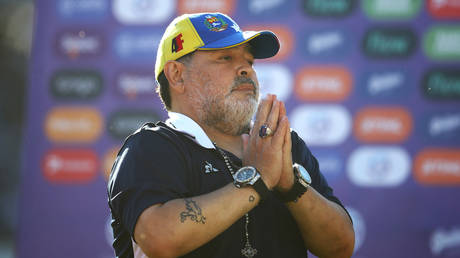 Eight medics who treated Argentine icon Diego Maradona are set to go on trial after being accused of negligence following an investigation into his death from cardiac arrest at the age of 60 in November 2020.

In a lengthy document which has been released to the media, the judge overseeing the case called into question “the behaviors – active or by omission – of each of the accused which led to and contributed to the realization of the harmful result.”

The charges allege that eight people, who include doctors, nurses and a psychologist, are responsible for “simple homicide” – charges which allege that the group of people intentionally took Maradona’s life, and comes after a probe in 2021 found that members of the World Cup winner’s medical team practiced medicine in an “inappropriate, deficient and reckless manner.”

Mario Baudry, a legal expert who represents one of Maradona’s children, claimed that the star was “in a situation of helplessness” around the time of his death.”

“As soon as I saw the cause, I said it was homicide. I fought for a long time and here we are, with this stage completed,” he announced.

Prosecutors had previously ordered investigations into the specific circumstances of Maradona’s death near Buenos Aires, which included property searches of his personal doctor and others linked to his treatment.

Shortly before his death, Maradona underwent brain surgery to treat a subdural hematoma and was still recovering from this at the time of his passing.

The defendants in the case have denied any accusations of wrongdoing, with several of them requesting to the court that the cases be dismissed.

Vadim Mischanchuk, the legal representative of one of the defendants, said that his client, a psychiatrist, had no responsibility whatsoever when it came to Maradona’s death, and suggested that a ‘fall guy’ is being sought to explain the premature death of one of Argentina’s most famous public figures.

“A guilty party is being sought at all costs and objectivity is being lost,” said Mischanchuk.

There is no date for the trial as of yet – but charges of ‘simple homicide’ in Argentina can lead to a term of between eight and 25 years behind bars.