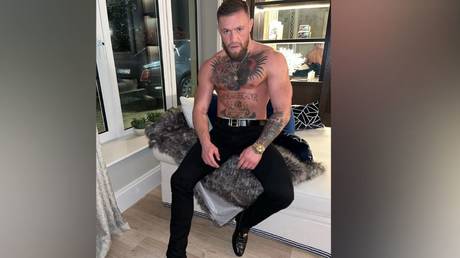 MMA icon Conor McGregor offered a handsome cash reward for anyone with information related to a CCTV clip he shared then deleted on social media, with a member of the public allegedly coming forward to help.

“Not a wrinkle on them. The no wrinkle green backs. I call them yum-yums,” he continued of the money.

“For whoever tells us who this little deli-chicken head is. The walk, run, and scrawny build all very distinctive,” McGregor said, describing a young man in jogging bottoms and a hooded top who passes for a few seconds near the start of the grainy minute-and-a-half black-and-white CCTV clip.

“Nothing will be said, but done,” McGregor vowed. “Reach out to who can reach me. Look forward to doing business,” he signed off, along with a cash emoji.

After taking the post down around 30 minutes after uploading it, McGregor used his Instagram stories to thank a ‘Good Samaritan’ shortly after.

“Wow that was quick. Thank you so much,” he wrote with a loveheart, suggesting the case had been closed.

McGregor quickly shared a separate clip of himself by the side of a swimming pool with a drink in hand celebrating the development and captioned it: “What’s 50 grand to a motherf***er like me, can you please remind me?”

All three clips in question have now been removed.

But the setting of the original video, which appears to be around the back of a pub premises with a van parked up and several barrels of beer stacked in line, plus its time and date – 23:19 on January 12, 2022 – leads to conclusions that the clip was related to an alleged petrol attack McGregor’s €2 million ($2.5 million) Black Forge Inn suffered on that day.

Around the minute mark in the video, flares can be seen in the background for a few seconds before the man exits the scene jogging.

At the turn of the year, local media in Ireland reported that two men were seen approaching the establishment in the Drimnagh area of the capital Dublin on a motorbike shortly before an alleged bombing attempt understood to have occurred after McGregor had been hosting a private taste testing event indoors.

“There was two people allegedly spotted on scooters who passed the establishment at the time and next thing they were being chased by two others who had come out of the property,” an unnamed source explained to Dublin Live at the time.

The Daily Mail also reported that two pipe bombs were allegedly found in the pub that McGregor purchased in 2019. Yet while Gardai, as Irish Police are known, released a statement saying there was no damage to the Black Forge Inn and that they would look into attempted criminal damage while appealing for witnesses, McGregor could have possibly been conducting his own private investigation into the incident.

McGregor, who is currently planning a return to the octagon after suffering a leg break loss to Dustin Poirier at UFC 264 last summer, has had his own brushes with Gardai lately too.

Earlier this month, he appeared in court and was accused of two counts of dangerous driving, driving without insurance and a license and failing to produce a certificate of insurance or license after Gardai arrested him on March 22 in Dublin’s Palmerstown region.

McGregor will head back to court on June 23, but resumed training the next day after his initial appearance before judges while revealing plans to campaign at welterweight where pound-for-pound ruler Kamaru Usman is the champion.

“Three weights. Three KO’s. Moving up. The one and only one to ever do it,” the former featherweight and lightweight champion tweeted.