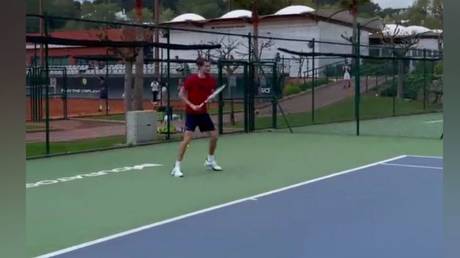 Russian tennis ace Daniil Medvedev has teased his comeback to the sport by sharing footage of himself training on a court on Tuesday.

Medvedev is currently ruled out of action after deciding to undergo surgery to treat a small hernia.

On April 2, he tweeted that the treatment meant he would “likely be out for the next 1-2 months,” later making the Libema Open in the Netherlands on June 4 among his targets for a return.

A fortnight ago, Medvedev then provided an update on his recovery and wrote: “It’s been a week since my surgery has been done,” to caption a photo of him with a headset on and a joypad in hand gaming.

“I’m feeling way better,” the Moscow native added, before concluding he will start “easy workouts in a few days” as only PlayStation workouts were possible at the time.

Late on Tuesday evening, Medvedev uploaded a pair of videos showing him swinging a racket around and knocking a ball back and forth for the first time in weeks.

“Back to tennis practicing,” he wrote to describe the clips, which received widespread approval from fans and other sports professionals.

“Don’t forget to practice a bit of Rainbow Six,” Manchester United and Spain goalkeeper David De Gea advised him alongside a crying-with-laughter emoji.

One other star who shared his thoughts was world number eight and compatriot Andrey Rublev commenting: “Octopus style is back in action” along with a love heart.

Though Medvedev is planning to compete again in the grass court season, he and Rublev are prohibited from featuring at its main attraction Wimbledon.

This is due to a ban on Russian athletes in response to Russia’s military operation in Ukraine, but both men should be welcome to perform under neutral status at the Libema Open which Medvedev said he was “looking forward to coming back to”.

“I love playing on grass and the relaxed atmosphere that Libema Open is known for,” the 26-year-old said in a statement published by organizers.