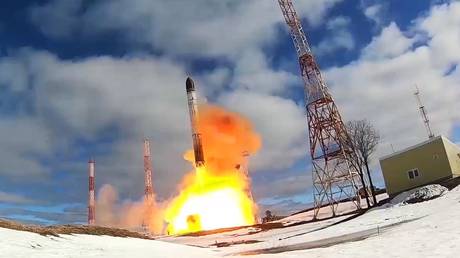 Russia’s brand-new RS-28 Sarmat intercontinental ballistic missile (ICBM) will be able to carry several unique Avangard hypersonic glide vehicles designed to penetrate any existing missile defense system, the commander of the Russian Strategic Missile Forces, Colonel General Sergey Karakayev, told the Russian media on Sunday. Earlier this week, the ballistic missile passed the first test in a series of final trials on its way to adoption by the Russian military.

“Development of Avangard has heralded a new era: the era of hypersonic weapons,” the colonel general told Russia’s Rossiya 1 TV channel, adding that the Sarmat can make this weapon even more effective.

Sarmat “is much more powerful than the [current] Avangard carrier-rocket,” Karakayev explained, adding that the ballistic missile has been specifically designed to be equipped with the Avangard warheads. The new missile is thus capable of carrying “more” gliders than the UR-100UTTKh ICBM currently in use by the Russian Strategic Missile Forces, the colonel general said.

It is unclear just how many hypersonic gliders Sarmat can be equipped with. The UR-100UTTKh missile can carry up to six multiple independently targetable reentry vehicles (MIRVs), but there has been no confirmation that this figure also applies to the Avangard. Karakayev did not provide any further details on the issue.

The Avangard is a Russian hypersonic glide vehicle, meaning it is a guided warhead capable of maneuvering while moving faster than the speed of sound. It can carry either a conventional or nuclear payload with a blast yield of over 2 megatons of TNT. Unveiled in 2018 by President Vladimir Putin, the warhead is said to be unmatched in its potential capability of penetrating missile defenses.

Chinese media once lauded it as a weapon that is “absolutely invulnerable to any air or missile defense system” and is “more intimidating … than a nuclear bomb.” Western nations have not yet acquired a hypersonic weapon of their own. In early April, Australia, the UK and US revealed that they would cooperate on hypersonic technologies as part of their AUKUS trilateral pact.

Washington is also testing such technologies as part of the Hypersonic Air-breathing Weapon Concept (HAWC) program, under which the latest known test launch took place in mid-March.

Russia reported a successful test of its Sarmat ICBM on Wednesday. President Putin said at the time that the new missile “has top tactical and technical characteristics and is able to penetrate all modern anti-missile defenses.”

Sarmat has a range allowing it to hit virtually any location in the world, Vladimir Degtyar, the chief designer and CEO of the Makeyev Rocket Design Bureau, the company behind the development of the missile, told the media on Sunday.

“This missile can have a trajectory circling the globe,” he has said, adding that “if a target is in the southern [hemisphere], it can be attacked from the north and a target in the north can be hit from the south.”