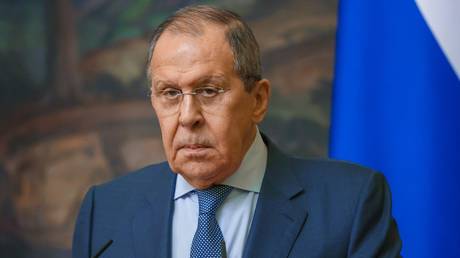 There is a belief in Moscow that Washington, London and other Western capitals – not Kiev – are the real decision-makers when it comes to Ukraine, Foreign Minister Sergey Lavrov said in an interview on Monday. He said that Kiev’s negotiators backtracked on the tentative understanding reached last month in Istanbul on advice from the US and the UK.

Ukrainian and Russian negotiators met face-to-face in Turkey at the end of March. Russia then took Ukraine’s outline, put it together in a “contractual” format and sent it to Kiev, only to get back “radically different” ideas in what was a “huge step back,” Lavrov said in the interview with the ‘Great Game,’ a political show on Russia’s Channel One.

“We know for sure that neither the US nor the UK – which is trying in every possible way to compensate for its current lonely status after leaving the EU – advised [Ukrainian President Volodymyr] Zelensky to speed up the negotiations, but to harden his position each time,” Lavrov said. The backtracking after Istanbul, he added, “was taken on the advice of our American or British colleagues. Maybe the Poles and the Balts played some role here.”

Meanwhile, Western leaders – such as the British PM Boris Johnson and EU foreign minister Josep Borrell – make statements to the effect that Russia “must be defeated” and that the conflict needs to be resolved “on the field of battle,” while sending weapons to Kiev, Lavrov pointed out.

“These weapons will be a legitimate target for the Russian Armed Forces,” the foreign minister said. “Warehouses, including in the west of Ukraine, have become such a target more than once. How else? NATO is essentially going to war with Russia through a proxy and arming that proxy. In war, as in war.”

While “casting spells” against a Third World War, the West is fueling the conflict with weapons and hoping to have the “fight Russia to the last man” in order to bleed Moscow, Lavrov said.

“You know, goodwill is not unlimited,” he added. “If it is not reciprocated, then this does not contribute to the negotiation process. As before, many of us are convinced – as I have already mentioned – that the real position of Ukraine is determined in Washington, London and other Western capitals,” he said, noting that some political scientists have said that talks should be held with NATO, and not Zelensky.

However, Lavrov also pointed out that Russia has not had much luck talking to NATO directly. When Moscow presented its security proposals to the US and NATO in December 2021, they were politely heard and then ignored.

“Rather impolitely, they made it clear that what was needed for our security was not up to us to decide,” Lavrov said.

The objectives of the “special military operation” announced by Russian President Vladimir Putin on February 24 have not changed, Lavrov said: the destruction of military infrastructure in Ukraine that threatened Russia, with “the strictest measures in order to minimize any damage to the civilian population.”

Lavrov also offered a prediction how the conflict would end. “As in any situation where armed forces are used, everything will end with a treaty,” he said. “But its parameters will be determined by the stage of hostilities at which this treaty becomes a reality.”