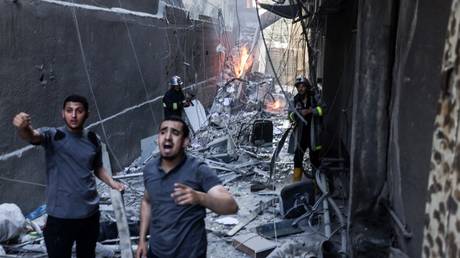 The Israel Defense Forces launched strikes on residential area in Gaza on Friday, in response to the alleged threat of assault by the Palestinian Islamic Jihad (PIJ). One of the group’s top members was killed. Local officials also say that the IDF attack left several civilians dead and dozens injured.

Video footage shows smoke rising from a densely-packed residential area of the Palestinian enclave, after Israeli forces conducted airstrikes. In a statement, the IDF said that the attack was launched following “the direct threats posed by the Palestinian Islamic Jihad in Gaza.”

The mission was named ‘Operation Breaking Dawn’ by the IDF.

❗The IDF is conducting operation "Dawn" against the Palestinian Islamic Jihad Organization in the Gaza Strip – press-service pic.twitter.com/TvHxKm7RT4

Palestinian health officials also claim that at least seven people were killed in the strikes, including a five-year-old girl. At least 40 people were injured, they added.

“We will not retreat and we will not hesitate,” PIJ Secretary-General Ziyad Al-Nakhala said in response to al-Jabari’s death.

Israeli officials have warned for several days that the militant group planned on attacking Israel with anti-tank missiles and sniper fire. The warning came after Israeli forces arrested PIJ leader Bassem Saadi in the West Bank city of Jenin on Monday. A Palestinian teenager was killed in the raid on Saadi’s home.

The PIJ said in a statement that it was declaring a state of “alertness” and raising the “readiness” of its fighters in response. Israel meanwhile restricted gatherings within 80 kilometers (50 miles) of Gaza, and alerted residents to the possibility of Palestinian rocket fire, while blockading roads into and out of the area.

Israeli Defense Minister Benny Gantz visited the IDF’s Southern Command on Thursday and issued a warning to Palestinian militants, saying “the threat will be removed one way or another.”