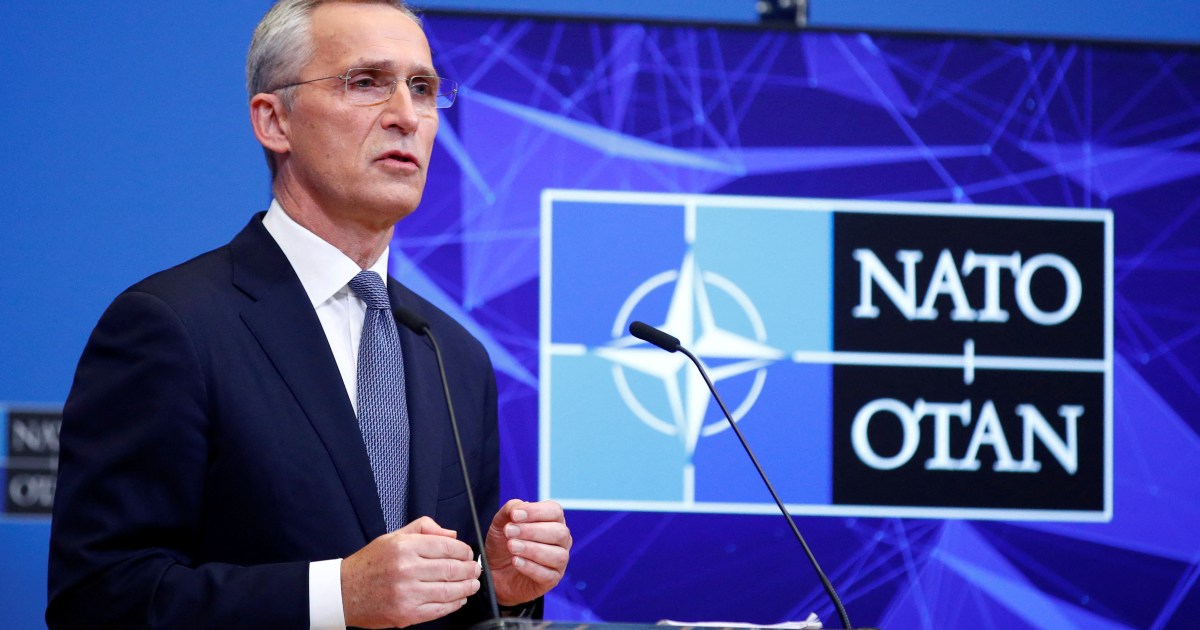 NATO warns Russia it will not compromise on the alliance’s principles, but invites Moscow to more talks over Ukraine security fears.

NATO Secretary-General Jens Stoltenberg has said that the military organisation and Russia have agreed to try to set up more meetings to ease tensions between them amid deep concern in the West about whether Moscow might order an invasion of Ukraine.

Speaking after chairing a meeting of the NATO-Russia Council on Wednesday, Stoltenberg said both parties had “expressed the need to resume dialogue and to explore a schedule of future meetings”.

He said that the 30 NATO countries want to discuss ways to prevent dangerous military incidents, reduce space and cyber-threats, as well as arms control and disarmament, including setting agreed limits on missile deployments.

But Stoltenberg said that any talks about Ukraine would not be easy.

“There are significant differences between NATO allies and Russia on this issue,” he told reporters, after what he said was “a very serious and direct exchange” with Russian Deputy Foreign Minister Alexander Grushko and Deputy Defence Minister Alexander Fomin.

“There is a real risk for new armed conflict in Europe,” Stoltenberg added.

Moscow has forced the West to the negotiating table this week by massing some 100,000 troops near the border with Ukraine, a former Soviet republic that aspires to join NATO.

Russia has denied planning to invade Ukraine but said it needs a series of guarantees for its own security, including a halt to any further NATO expansion and a withdrawal of alliance forces from central and eastern European nations that joined it after the Cold War.

Stoltenberg underlined that Ukraine has the right to decide its future security arrangements on its own, and that NATO would continue to leave its door open to new members.

“No one else has anything to say, and of course, Russia does not have a veto,” he said.

The NATO-Russia Council is the first meeting of its kind in more than two years. The forum was set up two decades ago but full meetings paused when Russia annexed Ukraine’s Crimean Peninsula in 2014. It has met only sporadically since, the last time in July 2019.

US Deputy Secretary of State Wendy Sherman also underlined that any European country should have the right to join NATO if it wants to.

“I reaffirmed the fundamental principles of the international system and of European security: Every country has the sovereign right to choose its own path,” Sherman tweeted as the meeting drew to a close.

Al Jazeera’s Natacha Butler said that allowing Russia to prevent Ukraine from one day joining NATO was something the alliance could not countenance.

“This is the fundamental problem of this meeting,” she said.

“And it was made very clear by Stoltenberg that although you have two sides, Russia and NATO, who seem to have agreed to at least continue with dialogue, ultimately neither of them seemed to have found any other common ground but they are rather stuck in their positions,” Butler added.

The talks came during a week of high-stakes diplomacy and a US-led effort to prevent preparations for what Washington believes could be a Russian invasion of Ukraine. Moscow has denied it is planning an attack. Still, its history of military action in Ukraine and Georgia worries NATO.

Stoltenberg, Russian Deputy Foreign Minister Alexander Grushko and Deputy Defence Minister Alexander Fomin were stern-faced before the talks. There was no public handshake, although the Russian delegation fist-bumped officials from the 30 NATO member countries inside the meeting venue.

Russia has accused the West of failing to appreciate the urgency of its demands, and said it is not prepared to allow negotiations to drag on indefinitely.

It said NATO’s expansion from 16 members at the end of the Cold War to 30 now – including a large group of ex-communist states in Central and Eastern Europe – posed a threat to its security and it needs to draw “red lines” now to protect itself.