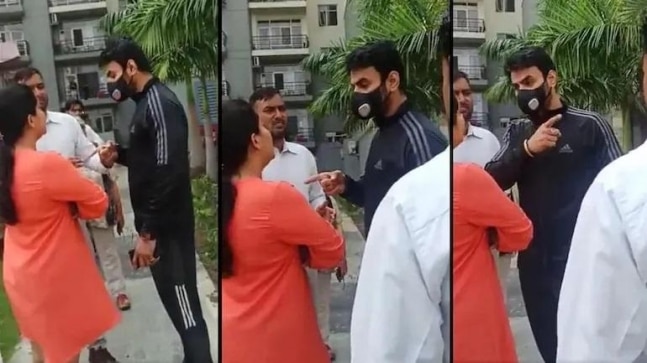 The Bharatiya Janata Party has distanced itself from the Noida man accused of hurling abuse and assaulting a woman. The accused, Shrikant Tyagi, identified himself on social media as a national executive member of the BJP’s Kisan Morcha. He also allegedly used the party name to cow other residents of the society where he lives.

A day before, videos of Shrikant Tyagi manhandling a woman had gone viral on social media. Soon after, the National Commission for Women (NCW) took suo motu cognisance of the matter.

Meanwhile, the BJP has clearly distances itself from the controversy, with party MP Mahesh Sharma claiming that he had never seen the accused at any party function. Mahesh Sharma clarified that Shrikant Tyagi was never a BJP worker.

The woman who was allegedly manhandled by Shrikant Tyagi spoke to the BJP MP and said, “I was talking to the gardener when he started abusing.”

More and more residents came forward and spoke to the BJP leader and alleged that Shrikant Tyagi used party’s name to cow other residents.

Mahesh Sharma said that he received direction from top leadership to visit the society over the matter.

Assuring strict action, Mahesh Sharma said that he has spoken to the police and more sections are being added to the FIR registered against Shrikant Tyagi.

The police are trying to nab the absconding accused. The police are also investigating why VIP speakers are attached to Shrikant’s vehicles.