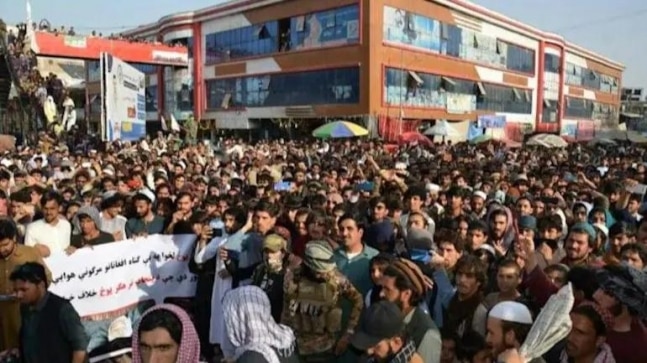 On August 15, 2021, armed Taliban militants posed at President Ashraf Ghani’s adorned desk in the Afghan presidential palace. Ironically, hanging on the wall behind them was a painting of Sufi mystic Sabir Shah crowning a kneeling Amad Shah Durrani, regarded as the modern Afghan founder.

While the world expressed shock over the astonishingly swift fall of Kabul, prominent Pakistanis raised a toast. They included political parties, senior journalists and retired generals. But none as overtly as Pakistan’s then Prime Minister Imran Khan who said “the Afghans have broken the shackles of slavery.” One of his ministers even said India has got an appropriate gift for its Independence Day.

Pakistan had always backed the Taliban. This continued even when Pakistan supported America’s war on terror in Afghanistan after 9/11. Pakistan’s backing, now more covert, for the Taliban only deepened as India became a close ally of non-Taliban governments after 2001. The Taliban’s return would not only install a friendly government in Kabul but also deal a blow to arch-rival India.

So, now the Taliban are running Afghanistan. “Breaking the shackles of slavery”, they have reversed a decision to allow Afghan girls to return to high schools. Government employees have been told not to shave their beards and to wear local clothing and pray at correct times. But what has also stood out is this: The border between Pakistan and Afghanistan is on fire. Sample some of these incidents from April 2022.

All this followed a fight between Talibani and Pakistani forces in Kandahar’s Spin Boldak district that left 20 wounded and 3 dead, and another clash in which five Pakistani soldiers were killed in Khurram district.

Afghanistan’s acting defence minister said on April 24 that the Taliban administration would not tolerate “the next invasion by Pakistan.” This was after The Taliban called in Pakistan’s ambassador to protest the strikes.

Pakistan’s foreign office spokesperson said Pakistan and Afghanistan are brotherly countries who regard terrorism as a serious threat and that Pakistan hopes for long-term engagement with Afghanistan to secure peace.

BUT WHY THE FIGHTING?

But why are the “brotherly” sides fighting? Pakistan clashed at the border with soldiers of even the US-backed Afghan governments. When Kabul fell, Pakistan thought this would change. Pakistan also thought the Taliban would control its ideological offshoot Tehreek-e-Taliban-Pakistan (TTP), a terror group that’s been trying to establish an Islamic caliphate in Islamabad.

Both were wrong assumptions. Since August 15, 2021, Taliban fighters have more frequently clashed with Pakistani soldiers, often fatally, along the 1893 Durand Line (created by British diplomat Mortimer Durand after whom India’s football tournament, Durand Cup, is named) that the former does not recognise. TTP has stepped up terror attacks in Pakistan. In response, Pakistan’s military has ramped up operations. 128 armed fighters have been killed since January 2022. The number of soldiers dead during this period is 100.

Let’s first understand the boundary question. The Taliban object to Pakistan’s fencing work on the Afghanistan-Pakistan border that “separates the ethnic Pashtuns living on both sides.” While the Afghan governments have disputed the border since Pakistan’s formation in 1947, the Taliban’s objection could also be from their desire to assert that they are not Pakistan’s proxy.

Espousing the Pashtun cause may also earn the Taliban legitimacy from Afghanistan’s largest ethnic group. Fencing anyway pricks the Taliban because a generation from its community grew up in Pakistan’s refugee camps, and now they have businesses and family there. Last but not least: the fencing work also impedes drug and human trafficking Afghanistan thrives on. On record, however, Pakistan and the Taliban have pledged to resolve the dispute through talks.

Anti-Pakistan sentiments are also high in Afghanistan because many see Islamabad as the primary driver of instability. After each act of hostility, hundreds of civilians can be seen pouring into Afghanistan’s streets chanting anti-Pakistan slogans.

The US withdrawal from Afghanistan also has a role in what is happening. America’s longest war ended after billions of dollars spent and thousands of lives lost. The war ended as it began, with the Taliban ruling Afghanistan. And that also seems to have emboldened TTP. Till March this year, terrorists attacked targets in Pakistan 52 times and killed over 150 people. As for the border clashes, the US withdrawal also seems to have made the Taliban hungrier to shake off the tag of Pakistan’s proxy.

There are operational factors, too. When the US was waging its war on terror in Afghanistan, Pakistan shared intelligence on militants for American forces to target them with drone strikes. Now Pakistan has to do it on its own, given the Taliban’s response. The Taliban are not ready to disown TTP. Both groups share more or less the same ideology.

The ouster of Imran Khan as Pakistan’s prime minister may also be playing a role in the current scenario. He had closer ties with the Taliban while maintaining his anti-US rhetoric. Imran Khan had even reached an agreement for a ceasefire with TTP in November last year. On the contrary, his successor, Shehbaz Sharif, has vowed to improve relations with the US and crack down on terrorists.

So, what comes next? Shehbaz Sharif has said Islamabad would “continue fighting terrorism”. Pakistan’s military has said it would continue operations to eliminate TTP that operates across the border between the two countries and has killed more than 70,000 people over the past few decades in Pakistan. The Taliban have warned of retaliation against Pakistan’s border raids.

There was a time when Pakistan said the Afghan Taliban was good Taliban and the Pakistan Taliban was bad Taliban. But what Pakistan missed was both are ideological brothers. And from being an asset, the Taliban as a whole are fast becoming a liability for Pakistan.

What is happening on the Pakistan-Afghanistan border might remind one of Mary Shelley’s story: how Victor Frankenstein rejects his creation for turning out to be a hideous creature, and how the Monster seeks its revenge through murder and terror.

The world is watching.